The past few months I've had the honor of chatting with the author of 'Tomorrow's Guardian', Richard Denning. He's currently in the the middle of his blog tour and todays he's visiting this little blog. I had the chance to ask him a few questions about himself and here's what he had to say!
Author Bio: 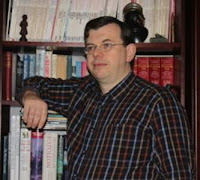 Richard Denning is a Young adult sci-fi, historical fiction and historical fantasy writer. He also writes book and board game reviews and online articles on historical and gaming related topics. He owns his own small publishing house, Mercia Books and is part of a board game design house Medusa Games.
A keen player of board games and other games he is one of the directors of UK Games Expo (the UK's largest hobby games convention). He is a board game designer and his first Board Game, 'The Great Fire on London 1666' was published by Medusa Games and Prime Games in October 2010.
Author website: http://www.richarddenning.co.uk
The Q/A Session:
-Can you give us a sentence or two about who you are and where you're from?
Richard: I was born in Ilkeston in Derbyshire (UK) and I live in Sutton Coldfield in the West Midlands. I work as a General Practitioner (family doctor) with a North Birmingham practice. I am 43 and am married with two children (Helen and Matthew).
-When did you first decide to write in hopes of publishing and why?
Richard: I started writing about 10 years ago (although like many people I did scribble some words at school. Then I went off to university and I was a Medical student and a house officer and senior house office in hospital (what you would call an intern) and finally emerged into general practice. After I had settled into a permanent post I started to write again. I enjoy reading and through those long years of study I read avidly. I started to get ideas for plots and characters and one day began writing. It was only a couple of years ago that I made a serious effort to get published.
-Do you have any writing rituals (ie: listening to music, writing at night, etc)?
Richard: Generally I write best in a quiet room. This usually means when the children are in bed (late at night) or in the afternoons when I am able to get home for a bit. I find after the noise and chatter of day to day life at the surgery that what I need to get the mind working is solitude and peace. When I am the plotting stage of a book I am more likely though to be out and about. I tend to think through the plots whilst walking or driving about and if I can visit a castle or battlefield that also helps to spark the imagination.
-What inspired you to write 'Tomorrows Guardian'? Who's your intended audience? 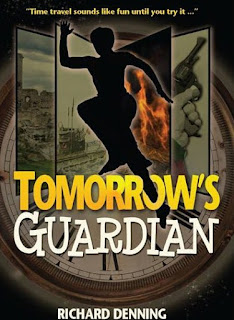 Richard: I enjoy Time Travel as a concept in fiction – movies, TV and books. So I wanted to write my own Time Travel adventure. But I wanted to explore the perils and challenges involved in time travel. The book is written with 10 to 14 year olds in mind but has gone down well with adults as well. It is set in England and so it will be interesting to see what Americans make of it.
-Pitch your book in 7 words or less!
Richard: Time Travel sounds like fun until you try it! D’oh that’s 9 – can I get away with that ;-)
-In a movie of your life, who would play you? In the same respect, who would play title character Tom in a movie adaptation of 'Tomorrows Guardian'? Why?
Richard: Me? Well if I lose my temper I tend to stomp about all legs and arms rather like John Cleese (from Monty Python and Basil Fawlty) – except he would have to lose the moustache.
As for Tom? Well actually the chap who plays Edmund in the Narnia chronicles would fit my idea quite well (Skandar Keynes) although he is now a bit old for Tom. But just how he was in Prince Caspian would be about right.
-Will we see sequels to 'Tomorrow's Guardian' and what should we expect?
Richard: Yes you will. The sequel (Yesterday’s Treasures) is written and will be out later in the summer: Everyone is searching for pieces of 'The Crown of Knossos:' historical artefacts which when assembled allow control over all of history in this and in the Twisted reality. The Hourglass Institute, Redfeld's masters and even the Directorate are soon in the hunt. One by one the pieces are found but eventually Tom and the others discover who is really after The Crown and what their motivations are. It is only then that they realise the extent of the danger, for 'Yesterday's Treasures' can mean the destruction of tomorrow.
-If you could live in a specific book genre, what would it be?
Richard: Ohh that is a good question. I tell you what if I could live in Bag End (especially how it is portrayed in the Lord of the Rings Movies) I would love that. So I guess I am going to say Fantasy BUT I always rather fancied the world of Poirot: England in the 1920s or 30s. So murder mysteries in England country houses would come a close second.
-I love the idea of time travel! If you could travel back in time, where would you go?
Richard: Well I would love to visit the big moments in history and the great places. See the seven wonders of the ancient world. Be with Caesar as he crossed into Britain. Accompany Alexander the Great to the borders of India, see the first plane flight and witness the signing of the Magna Carta. I would be a Time Tourist crossing off a list of the big moments.
-Your book has been compared to Doctor Who... As a Doctor Who fan (or Whovian) I need to know-- are you a Doctor Who fan and if so, who's your favorite Doctor?
Richard: YES YES YES. OK that might be a bit over the top. Then again I am a huge DR Who Fan. I first saw the John Pertwee era DR Who live (in about 1970) and remember being terrified by the first episode with the autons coming to life in shop windows. The Third and fourth DRs occupied the classic era of DR who with some superb stories. I then went back and saw the first and second dr. I actually like them all. Matt Smith is superb at present.
If I had to choose one Dr above all it would be Peter Davidson – number 5. Tends to get over looked but there was something about him I really liked – sort of kind, gentle but grumpy.
-If I were to look at your DVR (Digital Video Recorder), what television shows would I find on it?
Richard: Buffy and Angel (we are watching both these again with my 13 year old daughter. DR Who, Farscape, Firefly (one of the best Sci Fi series), Stargate, Star Trek (we getting a bit of a theme here), James Bond, Sharpe’s Rifles, Miss Marple, Poroit, Morse, Cadfael, Black Adder. How is that?
-One of the great things about blogging is that I get to spread the word about books I love. What's your favorite book and can you pitch it to our readers?
Richard: The Lord of the Rings had such a huge influence on me that I have to say if you have not read it you need to. Yes it can be tough going at times and is a bit dated but it has some wonderful passages in it. If I can sneak in a mention of two other authors I would pitch Terry Pratchett and Bernard Cornwall.
-Where can those of us residing in the US or Canada find your book?
Richard: On Amazon: http://www.amazon.com/Tomorrows-Guardian-Richard-Denning/dp/0956483569
On Kindle: http://www.amazon.com/Tomorrows-Guardian-Hourglass-Institute-ebook/dp/B004H4XDVI
At Mercia Books US site (both ebook and paperback): http://www.merciabooks.co.uk/buyingUSA.html
I'd like to thank Mr. Denning for stopping by the blog!  Be sure to check out my fantasy cast and the review of his book, posted in separate posts on this blog, and check out the official website for the book for more on this blog tour!

Thanks for visiting my blog! I'm here via the hop. Great interview questions :)