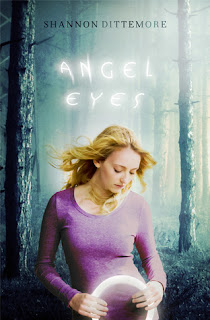 Taken from Goodreads, "Brielle’s a ballerina who went to the city to chase her dreams and found tragedy instead. She’s come home to shabby little Stratus, Oregon, to live with her grief and her guilt . . . and the incredible, numbing cold she can’t seem to shake. Jake’s the new guy at school. The boy next door with burning hands and an unbelievable gift that targets him for corruption.


Something more than fate has brought them together. An evil bigger than both of them lurks in the shadows nearby, hiding in plain sight. Two angels stand guard, unsure what’s going to happen. And a beauty brighter than Jake or Brielle has ever seen is calling them to join the battle in a realm where all human choices start. A realm that only angels and demons—and Brielle—can perceive."

'Angel Eyes' by Shannon Dittemore is a supernatural, angel themed YA read with religious undertones.  While I didn't love this novel, there were some aspects I really did enjoy.  Jumping right to the point, I liked that Brielle wasn't your typical heroine.  Normally, our female leads are in a 'fish out of water' position.  In this case, Brielle was coming back from her 'fish out of water' experience.  She had lived and grown before the novel even started.  We are introduced to her when she's at a bit of a low point in her life, coming back from this big, life changing event.  I loved that.

Brielle, as a character, was a solid main character.  Her reactions and thoughts seemed natural and she was a pretty relatable character.  The other characters were also engaging.  Jake, the love interest, seemed to have more of a role in the story than most male leads in past angel themed novels.

The reason I didn't rate this novel higher mostly falls on pacing. The beginning and end were fine, but the middle dragged a bit.  I had to push through it, because I didn't want to give up on 'Angel Eyes' when I liked the characters and the overall storyline.  That being said, it took some skimming through the middle bits to get back to a point where I felt I should read word for word, page by page.

This novel isn't for everyone.  If you don't like books with slight religious undertones, 'Angel Eyes' might not be your cup of tea.  However, the characters and the overall storyline are worth giving this a looksie otherwise!  'Angel Eyes' gets 2 out of 5 stars and is available wherever books are sold. 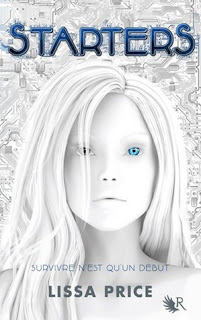 Taken from Goodreads, "Callie lost her parents when the Spore Wars wiped out everyone between the ages of twenty and sixty. She and her little brother, Tyler, go on the run, living as squatters with their friend Michael and fighting off renegades who would kill them for a cookie. Callie's only hope is Prime Destinations, a disturbing place in Beverly Hills run by a mysterious figure known as the Old Man.


He hires teens to rent their bodies to Enders—seniors who want to be young again. Callie, desperate for the money that will keep her, Tyler, and Michael alive, agrees to be a donor. But the neurochip they place in Callie's head malfunctions and she wakes up in the life of her renter, living in her mansion, driving her cars, and going out with a senator's grandson. It feels almost like a fairy tale, until Callie discovers that her renter intends to do more than party—and that Prime Destinations' plans are more evil than Callie could ever have imagined. . . ."


'Starters' had a lot of hype attached to it. It was being toted as the the next 'big' thing. Admittedly, I may have bought into that hype a bit, because I expected a little more than I got with this novel, 'Starters'. The concept is pretty cool-- the idea that people 'rent' bodies or lifestyles is intriguing and something I wouldn't put past people actually doing if the technology were really there.

As far as pro's, I liked the characters. Callie seemed like your typical 'protector' type. The book is told from her perspective and, while it does get a bit tiring being 'in her head' for so long, she's a pretty good lead character. Her supporting characters, enders in borrowed bodies, were, surprisingly great characters. With the first third of the book taking place in Callie's head, these supporting characters were totally welcome, in my opinion! The 'love interest', Blake, turned out to be pretty shallow in terms of characterization, but I think that might have something to do with the twist revealed later in the novel.

Despite the characters, I found issue with a few things in 'Starters'. While I finished the book pretty quickly, I found myself thinking 'where is this story going and when will we get there' a lot more than usual. The storytelling stalled a bit there in the middle, but thankfully picked up towards the end to a good conclusion with a surprising twist. The other con, I'd have to say, dealt with the world and history. I get that there was a war and that a large chunk of the middle aged population died, but everything else was a bit fuzzy. For example, why do people live so long in her society? The enders aren't just in their 80's or 90's, but in their hundreds. Also, it seemed like the world went downhill pretty quickly after this spore war, which I don't find completely believable.

All in all, 'Starters' was a decent novel with a good concept and some interesting characters, but fell short a bit. Was it a good enough novel for me to continue on with the series? I think so. Would I recommend it to others looking for a dystopian tale? Again, I think so. 'Starters' receives 3 out of 5 stars and is available everywhere books are sold.
Posted by Brooke at 11:08 AM No comments: