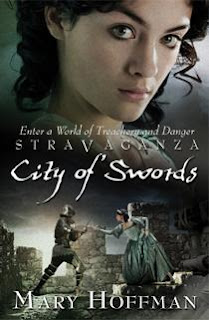 Borrowed from Goodreads, "Desperately unhappy, Laura has resorted to secretly self-harming. But Laura is a Stravagante, somebody who can travel in time and space. When she finds her talisman, a small silver dagger, she stravagates with it to sixteenth-century Fortezza, a town similar to Lucca in Italy, where she meets her Stravagante, who is a swordsmith. But Laura also meets the charming and attractive Ludo, and falls for him. Their love for each other is tested when Ludo lays claim to the crown of Fortezza, and Laura finds herself fighting on the side of the Stravaganti opposing him."

'City of Swords', what to say... Let me start with this: I really do love the Stravaganza series as a whole. Everything from the characters to the settings to the overall concept-- I love it. 'City of Swords' is the sixth and final book in this under appreciated series by Mary Hoffman. I'll miss jumping into Talia with the Stravaganti for many reasons, most of all because every time I opened a Stravaganza book, it felt like I was back in Italy!

On to 'City of Swords'... Is it my favorite of the series? No. Is it as engaging and entertaining as other Stravaganza books? No. Is it a good read for those who have read the books before it? Yes. Is it a fitting close to a fantastic series? Minus a few loose ends, I think so. The writing style used in '...Swords' seemed different to me than the books before it.

The downsides of the novel? The majority of the story was spent in the real world, rather than Talia. Also, we learned what was going on through long paragraphs of explanation, as opposed to seeing the action or learning it through dialogue. I didn't find Laura's character to be as fleshed out as the rest and her story, strangely enough, didn't hold as much as importance as I would have expected. The romance was between Laura and a certain someone was a nice addition to the story, but we, as readers, didn't get to see it develop enough to care as much as we should about it, I think.

Besides those concerns (that mostly had to do with Laura's plotline), I loved the interaction between the past stravaganti and loved, loved, loved everything that had to do with Luciano! His parts made me smile! Do I wish this had been a more solid read? Of course. However, I'm glad I've taken these trips to Talia, seeing such wonderful places and meeting fun, interesting characters. While the future of the series is uncertain at the moment, one thing is for sure; I'll truly miss following new Stavaganti into the beautiful cities of Talia.
Posted by Brooke at 7:23 AM No comments: