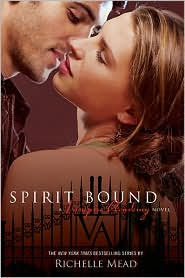 Normally, here I'd recap the story a bit, but in the case of 'Spirit Bound', it's complicated.  So many things that are important to this book were part of the original four books in the series.  My summery probably wouldn't make much sense to those who haven't read Vampire Academy from the beginning.  While I'll keep my review spoiler free, I'm hiding it under the cut, anyways, just in case you are still reading books 1-4.  CLICK READ MORE... Gaia, a sixteen year old midwife from behind the wall, never thought anything about the birthing law demanding that the first three babies delivered a month were to be taken to be 'advanced' inside the wall.  Advanced babies were to grow up in much better conditions than those behind the wall so there was no need to fear for their safety.  When her mother and father are taken captive by the government, accused of treason, Gaia has to make a decision that will change her life forever. Adding to her discomfort is something Old Meg, a family friend, gave her. Something her mother wanted kept hidden.  Does she stay and take over her mothers midwifery, or does she save her parents even if it means venturing into the unknown?

What a surprise!  I really enjoyed this book.  There were some faults, but overall, it was a great read.  Starting off with the characters...  'Birth Marked' has a small cast of characters, but a good cast of cast of characters.  The novel is told from Gaia's point of view.  With a face half scarred by a child hood incident, Gaia is considered a 'freak' by most in her village, but is liked, nonetheless, for her talent of delivering babies.  She is an interesting mix of shyness, sarcasm, and strength.  While some find this unbelievable, I don't mind.  She actually kind of reminds me of myself.  Shy and quite from a strangers perspective, but sarcastic and goofy to friends.

Also among the characters is Leon.  First introduced questioning Gaia about her family, he turns into a character you have to wonder about.  He has many mysteries about him and, even with this rude introduction, I really liked his character.  Leon and Gaia, well, I found them cute together, regardless of his background.

When it comes to the story, expect elements to be more raw than your typical book.  Just like 'Hunger Games' or 'Enders Game', 'Birth Marked' has a storyline driven by elements that aren't pretty or common.  The fact that this story starts in a society where babies are taken forcibly from mothers should give you that impression right off the bat.  Later on, as secrets are revealed, we learn that the plot is even more rooted to reality (though I won't mention how as to not spoil you!).  The other thing that is great about the storyline is that it isn't just about a couple in puppy love mode.  Gaia has a task she must complete and sticks to it, letting romance in but not letting it take away her goal.

What I didn't expect from this title was that it was the beginning of a series.  I thought it was going to be a stand-alone.  I was wrong.  The ending is so open ended.  Although I haven't found any information on a sequel, it's necessary..  The plot in this brings up so many questions-- none of which are answered.  I'd be upset if the society portrayed in 'Birth Marked' stayed the some.  Someone needs to change it, preferably in a sequel!

'Birth Marked' is available on store shelves and online.

Posted by Brooke at 8:24 PM No comments:

Reviews are on the horizon for 'The Dark Divine' by Bree Despain and 'The Eternal Ones' by Kirsten Miller.

Here's a quick word about each title for you...

'The Dark Divine' was pitched to me as being fantastic.  I don't think it ever read as 'fantastic' to me.  The writing style never sucked me in, which is pretty much a pre-req for a book to be anything other than 'okay'.  Maybe the problem is with me?  Books that deal with creatures like the ones in 'The Dark Divine' never really have caught my interest...


'The Eternal Ones'... I'm not done with this title yet.  I'm *nearly* done.  So far, I'm enjoying it.  Honestly, I wasn't sure about this one based off the cover and quick blurb on the back.  Rest assured there are no vampires in this book.  It's actually about reincarnation and love that transcends lifetimes.  It hasn't felt corny yet, but easily could before I turn the final page.

More extensive reviews on these later this week.  Also, my computer (or blogger, I suspect) is adding extra gaps between paragraphs on its own.  If you notice any odd gaps in my posts, sorry!  I'm trying to fix it!
Posted by Brooke at 4:57 PM No comments:

Labels: review, the dark devine, The eternal ones, Updates 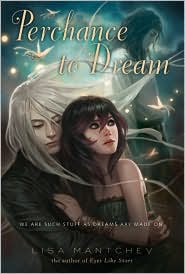 On a quest to find her friend, the pirate Nate who was previously taken captive by the evil sea witch straight off the pages of 'The Little Mermaid', Bertie, Ariel, and the faeries have their work cut out for them.  Bertie doesn't yet know how to use her newly claimed power-- to ability to make her word a reality.  As she clamors to get a grip on the twists of fate that have propelled her and her company to travel outside the world of their magical theatre, Bertie finds her journey even more complicated when she starts having feelings for both Nate and the air elemental Ariel.  Add in a father figure and you have the ingredients for a humorous adventure tale with magic and romance.


The change of setting was a breathe of fresh air.  While the theatre is an interesting place, I liked seeing our magical band of characters out in the regular world.   It seems to me that this setting brought the characters personalities out so much more than in 'Eyes Like Stars'.  Story-wise, the action seemed a bit rushed, but the dialogue and bits of information we get about Berties past and possible futures was well placed.


Speaking of characters, I love the new additions to the 'cast'.  Waschbar and the Scrimshander brought some very intriguing elements to the story, while the Strongman in charge of a traveling theater troupes wardrobe closet made me laugh out loud.  The fairies from 'Eyes Like Stars' are back and bring with them a nice sense of humor.  Ariel seemed more fleshed out to me in 'Perchance to Dream' than the first book.  Nate, well to put it bluntly, his dialect kind of bugged the heck out of me to the point where I wasn't looking forward to his scenes.


What do I love about both the 'Theatre Illuminata' books?  The covers.  Fantastic work by a very talented illustrator, Jason Chan.  'Perchance to Dream' has a cover that very well could be a wall print.  If anything, this series deserves an art book based off it with illustrations by the person who made 'Perchance to Dream's perfect cover.


All in all, 'Perchance to Dream' was a fun read.  I may not have understood some of the references and may have had to skim through some of the action, but overall this sequel does justice to its beginnings.  Add me to the list of those waiting for the conclusion!
Posted by Brooke at 4:26 PM No comments:

Did you read 'Eyes Like Stars' last year?  It's a quirky story about a magic theatre where characters from great plays literally take the stage every night.  It follows Bertie, an orphan girl, as she discovers who she is and how powerful her words are.

More information about this series can be found here!
Posted by Brooke at 8:26 AM No comments: