Halloween Treats (with no worry of cavities!)

Looking for a good supernatural read? Here are my Top 5 picks for Halloween!

Number 5: Wait Till Helen Comes: A Ghost Story by Mary Downing Hahn
- Molly and Michael have far more to worry about than getting accustomed to their new home when their step-sister begins talking to a ghost named Helen.

Number 4: A Time For Andrew: A Ghost Story by Mary Downing Hahn
- Changing places with a ghost is never a good idea and Andrew is about to find out why.

Number 3: Night of the Living Dummy by R.L. Stine
- You'll never look at a ventriloquist dummy the same way again after this spooky story about the far from innocent Slappy.

Number 1: Lord Loss by Darren Shan
-Bloody, but awfully satisfying to the reluctant Halloween reader.
Posted by Brooke at 4:56 PM No comments:

Before the Movie... Try the Book!

Before you see 'Cirque Du Freak: The Vampires Assistant' in the theater, try this book! Below is a quick review of this great series. 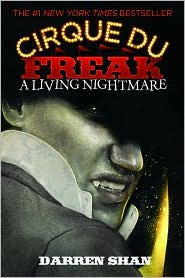 If you had to choose to become a half vampire to save your best friends life, would you? Darren, a normal grade schooler, is faced with that question in author Darren Shan's book 'Cirque Du Freak'. The first in a series of 12, this book follows Darren as he gives up everything to save a friend by becoming a vampires assistant. Trails and tribulations ensue as he slowly learns the ways of his new half vampire life.

'Cirque Du Freak' is great for reluctant readers, especially boys. It has a good mixture of action, angst, vampire fun, and most importantly, is an excellent start to an excellent series. Enjoy this read!
Posted by Brooke at 8:53 PM No comments:

Forever Favorites: The Dark Is Rising Sequence by Susan Cooper

Welcome to the first ‘Forever Favorites’ post here on BBOB. This is where I spotlight my favorite books, or in this case, series.

The first installment of this is a series called ‘The Dark Is Rising Sequence’. Written by Susan Cooper, it has been around a long time. While it has a huge fanbase in the UK, it is lesser known here in the States. 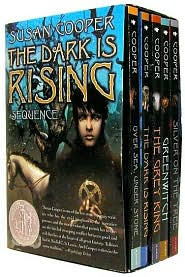 'The Dark is Rising Sequence' follows a group of kids as they embark on a journey to defeat a group of supernatural solders known as the ‘Dark’. Our cast of characters includes Will, a young boy who finds out that he isn’t a mere mortal, but a warrior of the ‘Light’; Bran, an albino Welsh boy who has a past not even he could have guessed; Jane, your typical no nonsense school girl; and Simon and Barney, her brothers. All find themselves on paths that were destined to be in a life and death battle as the Light and Dark are ready for their final meeting. Arthurian folklore is present throughout the books and told in a way that isn’t at all confusing for those who know little about it.

It’s complicated writing a review for a series, especially this one. Each story has a different purpose and you’ll meet characters in each book. ‘Over Sea, Under Stone’, the first book in the series (sometimes referred to as prequel of sorts), showcases Jane, Simon, and Barney. Will, the main character of the book isn’t featured until ‘The Dark Is Rising’, the second in the sequence. 'Greenwitch', the third title, is Jane's story. Bran is my favorite character in the sequence. He is introduced in ‘The Grey King’, the title I enjoy the most out of the series for its action and lyrical descriptions of Wales. Finally, in the final title ‘Silver on the Tree’, our heroes are together for the first and last time, each playing their own part in the climactic battle.

The series is a great pick for both ages 9 and up. Adults can easily enjoy it, as well. Those with an interest in good stories with Arthurian ties should love this title. While it isn’t the most action packed series on the market, it is full of lyrical descriptions that make you feel as if you, too, are experiencing what the characters are. In fact, the descriptions of Wales are the sole reason I want to travel there someday! If you haven’t read this series, take a chance on it. If you saw the (horrible) movie supposedly based of it, read this series. I promise, this series is amazing. I will cherish 'The Dark Is Rising Sequence' by Susan Cooper for the rest of my life and hope you will, too.
Posted by Brooke at 10:20 PM No comments: 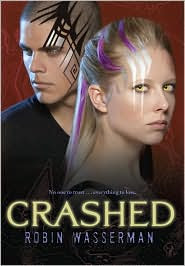 ‘Crashed’, sequel to ‘Skinned’, follows Lia as she continues on her journey to find herself, or rather, her NEW self. As a ‘skinner’ or ‘mech’, Lia has the body of a robot, but memories of her old human life. She was ‘reborn’ by her family after her human self's young death, something we learn all about in the first book of this series, 'Skinned'.

We meet Lia, Jude (the self proclaimed leader), Riley (his friend and lacky), and the other Mech’s living in their own community, away from the ‘orgs’ or humans. When a supposed ‘mech’ attack kills hundreds of ‘orgs’ and the ‘mech’ in question has the same face as Lia, suspicions turn the already unsettled world between ‘mechs’ and ‘orgs’over the edge.

I enjoyed ‘Crashed’ by Robin Wasserman. The trilogy, similar in a sense to The Uglies Trilogy by Scott Westerfeld, is proving to be a unique take on teen sci-fi. ‘Crashed’ has a nice mix of action, romance, and intrigue. While it dragged a bit in the middle and suffers from being the middle book in a trilogy, it kept me entertained and I came away happy to have read it. Is it the best in the series? No. I have to say I enjoyed the first book more than this, but then again, that can be said for many middle books in trilogies like this. Regardless, I’m still looking forward to reading the next installment of the YA Sci-fi series.
Posted by Brooke at 6:57 PM No comments: 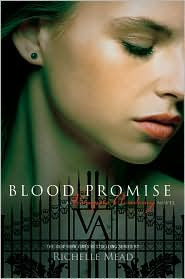 What a whirlwind of a book! Just like the previous Vampire Academy titles by Richelle Mead, I couldn't put 'Blood Promise' down! The story centers around Rose as she heads to Dimitri's home town in the hopes of keeping a promise they made to each-other before their world was ripped apart. Rose's future as Lissa's Guardian are put in danger as her journey takes her into more dangerous places than she ever expected and she has to decide once and for all, does she have the power to destroy her first love?

I gave myself a week to finish this book and proceeded to finish it within the first two days. The writing style is just as addictive as the other fantastic books in the series, with a few weak points. It seemed to me that she was in Russia with Dimitri's family too long. We got so used to Rose as being a very proactive person that watching her be indecisive for so long was tiring and made the middle of the book feel long. My other problem was that she was separated from the secondary characters we've come to know and love for too long. Some may say that was the point of the novel, to keep them separated, but, in all honesty, they could have found each-other a little bit quicker.

Even with the problems, I still found 'Blood Promise' engaging and can't wait for the next book in the series. Mead has a great series on her hands!
Posted by Brooke at 11:32 AM No comments:

'Hush Hush' by Becca Fitzpatrick should be in most bookstores now!

A few years back, I read a supernatural romance about vampires by a stay at home mom named Stephanie Meyer. Upon finishing her book, I knew it had a big, bright, future. I got the same feeling with 'Hush Hush'. It will be big, folks. Go to her signings NOW, because this series is going to be a popular one!

My review of 'Hush Hush' can be found by clicking one of the two tabs in this entry!
Posted by Brooke at 8:10 AM No comments:

Me, again! Just wanted to catch you up on what I've been reading recently. Anyone paying attention to my Goodreads (look on left sidebar!) will notice I have added a few titles to it recently. All will be getting formal reviews from me in the coming weeks, but I thought I'd give you all a quick preview!

First off, any young readers out there fans of comics and manga? 'Over My Dead Body: 43 Old Cemetery Road's' by Kate and Sarah Klise is great. It's not a traditional book and uses letters, newspaper articles, comics, etc, to tell the story of a old house and its residents: A writer, a boy, and a ghost. Quick review? It's quirky and I love it. Check out the first book in the series 'Dying to Meet You: 43 Old Cemetery Road' first for background, then dive into this fantastic sequel!

Next up, by Robin Wasserman is the second book in the Skinned Trilogy, 'Crashed'. I have been looking forward to this for a while and had pretty high expectations. Did the book meet them? Eh, sort of. It was good, but, for me, had some problems.

Last up on this mini recap of books, the fourth Vampire Academy book (author: Richelle Mead) entitled 'Blood Promise'. What a whirlwind of a read. I picked it up and literally couldn't put it down. Was it perfect? No. Was it worth the time spent reading it? Oh yeah.

More detailed reviews of these are coming soon, so stay tuned! As always, I encourage you to comment and if you have any book rec's you'd like to share, let me know! I'd love to hear from you!
Posted by Brooke at 10:44 PM No comments: