I just wanted to apologize for my lack of updates.  I didn't mean to drop off the face of the earth!!!  Why the sudden disappearance?  Mainly, my day job has been giving me more hours and on top of that, I'm working on a side project that will (fingers crossed) let me cut loose from the before mentioned day job, so I've had less time to 'chill'.  Needless to say, it's been hard to find the time to really get into a book!


I recently started reading 'Tempest' by Julie Cross.  So far, I'm really enjoying it!  'Tempest' is a time travel story that has already been optioned by a motion picture company. It hits store shelves in January.  I'll be sure to leave a review here on the site when I finish this read!


Also, be on the lookout for a review of 'A Beautiful Friendship' by David Weber.  This book was sent to me via the publisher. I've never read Weber before, so I'm looking forward to reading his first YA novel.


So, don't worry.  I'll be a back and updating.  It just maybe a little less frequent!!!

The Question of the Week is:  If you could pick one character in a book, movie or television show to swap places with, who would it be?

Answer: There are so many characters I love reading, but would I want their lives?  Hmmm...  I would say Bella from 'Twilight', but becoming a vampire is *so* not on my bucket list.  Then there is Anna from 'Anna and the French Kiss'.  I mean,  Étienne and France?!  Two definite perks, but on the other hand, Anna has a bit of a screwed up family life.  If only I could take bits and pieces of many books and mash them into one.

Maybe it will be easier to switch to TV shows?  I could be Elena from The Vampire Diaries.  She gets to make out with lots of hot men and lives in an adorable town.  But then again, her life isn't always peachy.

Movies?  I think being Beauty from Beauty and the Beast (ie: Disney version) might be the best choice. She can sing, has a library handed to her, and falls for a handsome prince.  Just being a Disney Princess in general would be neat.  Maybe I'll just choose that answer?  Or a mixture of all of the above?
Posted by Brooke at 11:20 AM No comments: 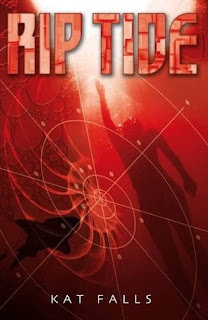 Taken from Goodreads, "Return to the subsea frontier with Ty and Gemma! The mysteries of the deep are deadlier than ever when Ty'With time running out for his parents, Ty's desperation leads the two teenagers to the underwater underworld...and into an alliance with the outlaws of the Seablite Gang. But one mystery soon leads to another. How has an entire township disappered? Why is the local sealife suddenly so aggressive? And can the Seablite Gang be trusted...or are Ty and Gemma in deeper water than they realize?"


It's only been a few months since my last trip under the sea with Kat Falls and 'Dark Life' and, boy, am I happy I got to return so soon with 'Rip Tide'. 'Rip Tide' is a 'rip roaring adventure'!


Just like the original, 'Rip Tide' starts with a bang.  Readers are thrust into an undersea adventure that doesn't let up.  The story is paced well and addictive in nature.  This book is truly one that will keep you reading hours on end.  Kat makes a smart decision with 'Rip Tide' and takes the story into a totally new setting.  Because of this choice, 'Rip Tide' is still a very fresh and almost standalone story.  I wouldn't read it before reading 'Dark Life', but it is nice that 'Rip Tide' has its own story, as opposed to just being a 'middle book'.


The banter between the two on again off again leads, Ty and Gemma,  is spot on and the secondary characters are interesting to read.  Gemma has some nice character development. I'm looking forward to seeing what might happen next in the series!


'Rip Tide' is an addictive, action, adventure set in a cool underwater world.  You won't regret reading this series!