I recently found two author blogs you might want to take a look at!

First comes the blog by Tom Angleberger, author of 'The Strange Case of Origami Yoda'.  Overall, it's a pretty neat site.  You'll find blog entries, along with instructions on how to make your own Origami Yoda and (in the blog) Origami Admiral Ackbar!  Angleberger also lists his tour dates and other general information on the site.  Check it out!!!

Second is a blog written by Kirsten Miller, author of 'The Eternal Ones'.  She has some pretty interesting things going on over there!  Check the entries to learn how to submit your photo for her 'Who Were You' posts, where she explains who you were in one of your past lives.  Miller also talks a lot about the supernatural things that have happened to her in the past.
Posted by Brooke at 3:45 PM 2 comments:

News: Stephenie Meyer Does It Again! 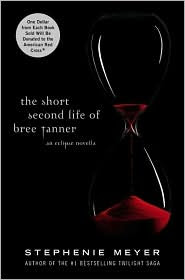 According to Yahoo!, 'The Short Second Life of Bree Tanner: An Eclipse Novella' has sold over 1 million copies.  That is quite good considering it's only been out for a little over a month!

If you haven't purchased your copy yet, remember that until July 5th, the book is being hosted on a dedicated site to read in its entirety for free.  Yes, free!  Head over and check it out.

I haven't read 'The Short Second Life of Bree Tanner: An Eclipse Novella' yet, mostly due to the fact that I had completely forgotten about the character featured. I had to look around the web to figure out who she was.   I actually doubt I'll ever read it, even though I am a recovering Twi-hard, because even after learning who the character was, I still wasn't too interested.

Me thinks I'll just hold off until the fantastically lucky Stephenie Meyer comes out with some new universe-- or a sequel to 'The Host'.
Posted by Brooke at 7:59 PM No comments:

Just a quick update to catch you up on what I've been reading lately and what I will be reading soon!!!

Just finished:
'The Carbon Diaries: 2015' by Saci Lloyd
Quick Thoughts: Not a fan of this title. I had to push myself though it, skimming most of the last third of the book. Expected more. In stores nationwide and online now.

'Matched' by Ally Condie
Quick Thoughts: When can I get my hands on the sequel? Is tomorrow too soon? :p Needless to say, I really enjoyed this title, being released November 2010.

Looking Forward To:
'Torment' by Lauren Kate (On it's way to me from ALA10!)
'Abyss' by Troy Denning (Hoping Denning's addition to Fate/Jedi is decent!)
Posted by Brooke at 10:42 PM No comments:

Remember my last post on the awesome contests Michelle Zink is hosting at various blogs here on the world wide web?  Well,  Blog #1 has been announced and the contest has begun!  Head over to 'Bloody Bookaholic' and comment on her contest post for a chance to win a really fantastic swag package!

FYI, if you didn't enter Michelle's IPod giveaway, go and enter that, too!

Here's a quick look at the new book trailer for  Michelle Zink's book 'Guardian of the Gate'.

Posted by Brooke at 9:24 PM No comments:

Book trailers are coming out more and more frequently.  Here's a few I stumbled upon recently... The trailers for the Gone novels are actually pretty good! 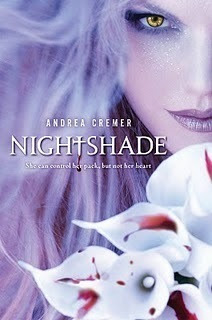 18-year-old Calla is the alpha female of her clan of were-wolfs (aka Guardians) and as the alpha female is promised to the alpha male of her brother clan-- the handsome Ren.  The union between the two alpha's will create a new clan-- one with the important job of protecting land which the clan masters deem forbidden.  But when Calla goes against her nature and saves the human boy Shay, she finds herself on a path that makes her question the ideals she's gone along with her entire life.

I'm the first person to tell you that I don't like werewolf books.  There's evidence of it in previous blog entries to prove it.  However, I really *really* enjoyed 'Nightshade'.  Very similar to how 'Twilight' was a book for those who had never read vampire books before, 'Nightshade' is a book for those who haven't read werewolf books before.  You'll definitely want to give this read a try.

'Nightshade' is told from the point of view of Calla, alpha pack leader. She brings an interesting perspective to the novel as she is the 'creature' in the story, as opposed to the confused human.  She's headstrong and should please readers who like strong-willed female protagonist stories.  The male leads, Ren and Shay, are equally as engaging.  And the love triangle?  Well done.  I think the best love triangles are the ones where the reader has a tough time choosing sides and I must say I was 'Team Ren' one page, and 'Team Shay' the next.  Speaking of Shay, he has secrets-- secrets that cold propel this story into something even more compelling in future novels.  That being said, be warned-- this is the first in a planned trilogy.  The ending is very open ended and will leave you wanting more!

'Nightshades' story and voice drew me in instantly and it had a good mix of romance, action, and dialog.  On the topic of romance, the romance in 'Nightshade' reminded me a bit of a harlequin novel.  Keep in mind when reading it that the characters are 18.  Even though characters don't go all the way, they do interact romantically.  While I wouldn't classify this for older teens only, I wouldn't be giving it to a pre-teen or young teen.  (Of course, that is my prerogative.)

Author Andrea Cremer has a fantastic novel on her hands that is sure to find a following fast.  Read 'Nightshade'.  It's fantastic. 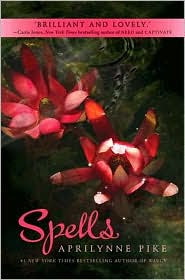 'Spells', sequel to last years 'Wings', picks up shortly after the original book ended. Laurel is on her way to Avalon for a six week crash course in how to be what she discovered she was in 'Wings'-- a fairy. But trouble looms overhead as the troll Barnes is still very much after her and her family. How far will Barnes go to to finish what he started? Will Laurel be able to choose between fairy guardian Tam and human boyfriend David? And most importantly, how long can Laural live between worlds before she has to choose one?

Let me start out by saying that this book isn't perfect. The storyline in 'Spells' isn't clearly defined and the love triangle isn't executed very well. Laurel is either with Tam in the world of the Fae or in the human world with David-- never do they mix. This set up made it seem like Laurel was using both men, as opposed to just having conflicting feelings about each.

The storyline felt rushed in some parts and dragged in others. For example, I loved the idea of Laurel staying and learning at the Academy in Avalon, but we hardly saw any of her time there. Too much time, in my opinion, was spent in the human world, which pales in comparison to Avalon.

While this book wasn't as good as the original, I am still eagerly awaiting the final book in the trilogy. Despite the flaw's, I still think Laurel and Tam are interesting voices. (They better be together in the end, btw!) Also, Pike's ideas on the world of the fae are unique and I'd like to know more about their way of life. So, all in all, though 'Spells' isn't fantastic, don't give up on it. This series still has potential to be really good!

Michelle Zink, author of 'Prophecy of the Sisters' and 'Guardian of the Gate', announced on her blog that she is holding a contest to win a pretty sweet 'Ipod Super Swag' pack.  Check it out on her blog!

Also mentioned in her entry is that she's choosing five blogs to ALSO hold Swag contests.  While I am not one of them, I'll keep you posted on where to find the lucky blogs!

As a sidenote, if you do decide to enter, make sure to mention you were referred by Brookes Box of Books by leaving the URL!
Posted by Brooke at 11:29 AM No comments:

Sheesh! Too Many Pages!

Hey guys, I'm coming off of a whirlwind book reading week.  I love it when books fall into your lap at perfect times.  While I love the continuous 'Oh my goodness I can't put this down' feeling these past few books have given me, I can't say my eyes have!  They're screaming for a rest (which I won't be giving them!).

Just a quick check in to say hello and let you know that I'll be posting reviews on a few books within the upcoming week!  Two are ARC's yet to be released (of the supernatural romance kind) and two currently out and about on the sales floors of your favorite bookstores!
Posted by Brooke at 11:09 PM No comments: 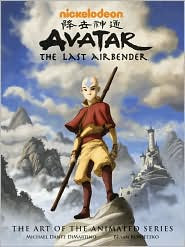 This book is a fantastic addition to the 'Avatar: The Last Airbender' universe. Hardbound and sitting at around 185 pages, it is packed with commentary on the series beginning to end, sketches of the characters as they evolved into what we see in the animation, and best of all, lots of original artwork by the creators.

Creators Bryan and Michael let us in on lots of little factoids sure to please Avatar fans. (Unfortunately, they left out the part about where Zuko's mother is, but I guess that was to be expected. :p)

As before mentioned, the book goes through entire timeline of the series and beyond. You'll see art from the pilot, all three books, and the extra art from SDCC, DVD covers, etc!

If you are an Avatar fan or just a fan of the artwork, I highly recommend you pick up this book.

'Avatar The Last Airbender- The Art of the Animated Series' is available now online and in stores.
Posted by Brooke at 10:20 AM No comments: 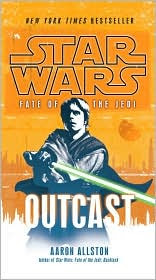 My expectations were low for 'Outcast', but I must say it wasn't as bad as expected. I loved the 'fun' nature of it, even if the stories were a bit hard to believe at first. I'd read this over LotF or NJO any day. Allston did good on this-- and made me laugh quite a bit when it came to characters quips! The character of Jaina was more readable than she's been in quite a while!

Dare I say-- I might continue the series! Regardless of the hard to believe storylines and the post-Jacen world, Allston set up a fun read that felt similar to old school Star Wars EU titles.
Posted by Brooke at 11:47 PM No comments: