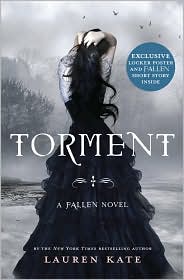 
In the aftermath of what happened at Sword & Cross, Luce has been hidden away by her cursed angelic boyfriend, Daniel, in a new school filled with Nephilim, the offspring of fallen angels and humans. Daniel promises she will be safe here, protected from those who would kill her.

At the school Luce discovers what the Shadows that have followed her all her life mean - and how to manipulate them to see into her other lives. Yet the more Luce learns about herself, the more she realizes that the past is her only key to unlocking her future...and that Daniel hasn't told her everything.

'Torment', sequel to last years 'Fallen', has me a bit torn. Let's start with the good stuff... Visually, the cover is as stunning and eye catching as its predecessor. The cover designer should be very proud of the work they did for 'Torment'.

New characters Shelby and Miles also belong in the 'good stuff' category. During moments where I felt the story dragging, these two would pop up and bring it back up to speed. The intriguing character background given to both Shelby and Miles make them fun to read about. They saved us readers from many of Luce's lamenting about Daniel, the other angels, or life in general. And Miles specifically? Loved him. When Daniel was bugging the heck out of me, Miles seemed like the perfect choice for Luce. (But we'll get back to Daniel...)

Finally, the revelations at the end of 'Torment' and that horrible (in an 'I have to wait how long to read book three' sort of way) cliffhanger make up for this books shortcomings.

Now onto the before mentioned shortcomings...  Mainly, 'Torment' suffers from being far too secretive. Many questions were posed in 'Fallen'.  I expected a few more answers in 'Torment' than I received.  Actually, I expected a lot more answers than I received.  It seems far too much time was spent on things that didn't move the story. For example, for the first half of the book, Luce kept on lamenting about Daniel, how he treated her like a child, how she longed for his touch, etc. Had the story been going somewhere at that point, fine, but really, it wasn't.  Not until Shelby and Miles really came into the story.  And then again, not until Thanksgiving rolled along.  The real meat of the story didn't actually come into play until the last 100 pages or so, which was too, too late in my opinion.

The other problem I had with 'Torment'?  Daniel.  Mysterious is one thing, but he was just being too secretive for my tastes.  Honestly, being an angel who's lived for centuries, I expected him to be a little less dense and let Luce, who he supposedly loves, in on a few of the things that may save her life.  At this point, I'm all for her cooling down with Daniel and getting with Miles, or Cam for that matter.  That's how low Daniel fell in this novel.

Overall, I think 'Torment' is a good sequel, even with its negatives. The new characters and the cliffhanger make me definitely want to continue with this series. 'Torment' is available to pre-order at your local bookstore and online now!
Posted by Brooke at 10:00 AM

I agree 100%. I was really disappointed by the fact that there were so many questions being asked but no answers to any of them. Torment just kind of introduced more new material and then left me even more confused.

I thought Miles and Shelby were awesome and I love how they brought out the best in Luce. She didn't just sit around thinking and longing for Daniel once they began taking a bigger stand in her life.

And I agree about Daniel as well. Seeing as Luce is such a huge part of what is going on, you think he'd tell her something. I don't believe that keeping people in the dark is beneficial. I know that for story purposes he needs to keep quiet (for plot and such) but it's taken way to far to the point where he hides everything and anything. No wonder Luce is frustrated beyond belief. And the way it ended was pretty self righteous of him as well. Like oh, I'll save Luce, no worries when I think she's proved that she doesn't really need him at all. Disappointing really because I liked Daniel in Fallen.

Whoa, i just wrote an essay haha. ;) Also, team Miles for the win!

Michelle- I'm not the only one! Yay! I enjoy essay long comments, btw, especially on books that I know none of my friends will pick up!!!

At this point, I'm not even sure Daniel is on the right side. The last few chapters just tossed so much at us.... And they better keep Miles and Shelby in the story.

Did you catch the *SPOILERS BEYOND HERE* part where Luce's friend was nicked by a very poisonous arrow, one that Cam whipped away from Luce pretty quickly when she tried to touch it earlier in the book? I have a feeling something not soo good will happen with that. Though I could be reading into it. *SPOILERS OVER*

I've been waiting to rant over this book with someone haha. I finished it over a week ago and since not that many people have read it yet, I've just been keeping it all in.

And I did catch that part at the end with the arrow and was kind of like "oh, so nothing is coming of this?" I guess maybe, in the next one, something may happen? I'm not sure how many books are going to be in this series but I really need answers ASAP.

I hope they keep Miles (and Shelby) as well. To be honest, I don't even know why Luce loves Daniel. Yes, she's drawn to him due to their long history with each other but other than that, I don't really get it.

And you're more than welcome! Talking about books in detail is one of my favourite parts of blogging. ;)

Michelle- Judging by how this book went, I doubt this is going to be a trilogy of books... It's hard to tell, though!!!

Oh Daniel... How far he's fallen! I totally agree with you on Daniel/their relationship.

Thank you for this informative and honest review---I love that! I'm on an ARC tour for this one but haven't gotten it yet. I hate when a series book does not answer my questions!

Kelli- Thanks for stopping in! I'd love to know what you think of Torment when you finally get to reading it!!!