Recently, Variety announced that Disney had bought the rights to the upcoming book 'Matched' by Ally Condie.  See my review of the book here.  I'm not surprised 'Matched' got picked up, but am surprised it happened so quickly!  The book hasn't even officially come out yet!  The sequels are years away!  The story, though I predict it won't, could fail miserably or have really bad sequels.  Fingers crossed it doesn't, but it could. I'm almost forgetting the fact that Disney could also mess this up by casting, say, Miley Cyrus as Cassia or something.  Note to Disney-  I'd prefer NOT seeing any Hannah Montana stars in 'Matched', thanks.

With 'Hunger Games' and 'Vampire Academy' already fantasy cast here on the blog, now I think it's time for 'Matched' to get the same treatment.  Here you go-- the fantasy cast of 'Matched'. 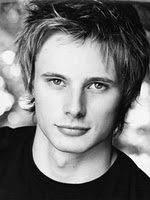 My excitement over the third season of Merlin may have prompted this casting, but the more I think about it, Bradley would be the perfect Xander. He's handsome, built, and comes off as friendly on the screen. I believe Bradley has the acting chops to really get the audience to root for him and Cassia, just like Taylor Lautner did as Twilight's Jacob. All he needs is to work on an american english accent and he'll find himself a whole new fanbase over here as Xander!

Originally, I thought Steven Strait would be too old to play an older teen. However, it turns out he was born in 1986! Dressed up right with a young hair-do and look, I think he'd be really good as the mysterious Ky. He has that bad boy aire to him that totally shouts Ky. On a sidenote, I was shocked when I read that he got married in 2008! Why are all the hot ones off the market?! ;)


?????
I just have no idea who to choose! Cassia's hard because you need a girl with a classic sort of prettiness about her, nothing too over dramatic or sexy. She also needs to believably play someone responsible, hardworking, and smart.  You don't know how hard it was thinking of young actors who have that trait.

If I had a TARDIS, I'd probably bring a young Anne Hathaway or Rachael Leigh Cook into the future for the role of Cassia, but alas...

I'm open to suggestions on this casting. Who do you believe would be an awesome Cassia?
Posted by Brooke at 9:24 PM