Review: The Replacement by Brenna Yovanoff 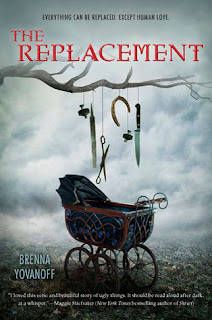 
"Mackie Doyle seems like everyone else in the perfect little town of Gentry, but he is living with a fatal secret - he is a Replacement, left in the crib of a human baby sixteen years ago. Now the creatures under the hill want him back, and Mackie must decide where he really belongs and what he really wants."

First things first, this cover is amazing.  From the imagery to the glossy, metallic look, everything about it shouts 'read me'.  I was sucked in by the cover, not the blurb on the back.  The cover sold me on this title and made me look forward to reading it.  They say you shouldn't judge books by covers, but in this case, the cover totally lives up to the text.

I was a bit worried about the story when I saw it being compared to 'Catcher in the Rye'.  Long time readers know that I despise 'Catcher in the Rye', so you understand why I had my doubts.  While I can see the connections, I believe 'The Replacement' has a completely different feel from the classic it's compared to.

The story is dark, more urban fantasy than I'm used to reading.  It was a nice change, actually.  Starting with the characters, I felt them to be pretty unique.  The title character, Mackie, had a very difficult problem to deal with and felt pretty fleshed out to me.  You really do feel for the kid-- knowing that you're dying and having to hide your true identity from your best friend? Mackie brings an interesting perspective to the whole fae thing, different from other characters in other urban fantasy titles.

Mackie's best friend, Roswell, left me with a few question marks over my head.  I loved his character and really loved his name, but his family history was never really explained.  Knowing a bit about that would have definitely fleshed out Roswell a lot more as a character.  It makes me wonder if his family history was left out for a reason?  A possible companion novel of sorts?  We shall have to see...

And then there is Tate, the token love interest.  As far as token love interests go, Tate was a pretty solid character.  Like Roswell, I would have liked to see a bit more her backstory.  The romance between her and Mackie, well, it felt a bit rushed to me, but what YA novel doesn't have a rushed romance now a days?

I suggest picking up 'The Replacement'.  Minus the quick plot, it is a different sort of read and is perfect if you feel stuck in a supernatural romance rut!  'The Replacement' is on store shelves now!
Posted by Brooke at 10:05 PM

Good review, I'm so looking forward to reading this.

Thanks for the honest review. I am really excited to read this novel. I'm interested to see how fast the plot actually goes. I hadn't heard this compliant.

I can't wait to read your reviews of this title. I hope you enjoy it! Thanks for stopping by!