The S.O.S Book of the Week is where I'll let you in on what new releases I'm looking forward to! S.O.S comes from the term 'Strict on Sale'. It's bookseller speak for a title that you can't sell before a specific date-- think Harry Potter. While the books I have here may not be S.O.S titles specifically, they are all new! 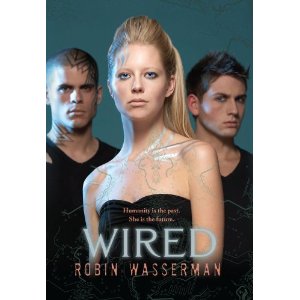 'Wired', the conclusion to Robin Wasserman's Skinned Trilogy, should be appearing on store shelves September 14th. I am quite looking forward to this release. Both 'Skinned' and 'Crashed' fell into my lap. It's one of those series that is easy to miss, not highly promoted, but one that is actually pretty darn good!

Here's a blurb on 'Wired' found on Amazon:

One year ago, Lia Kahn died. A few days later, she woke up.

At least, it was supposed to.

But now everything Lia thought she knew has turned out to be a lie; everyone she thought she loved has been stolen away. And someone is trying to get rid of the mechs, once and for all. Lia will risk everything to save herself and the people she can’t live without. But not before facing one final truth: She can’t save everyone.

I'm hoping this has a fantastic conclusion, something in the lines of 'Hunger Games' or the 'Uglies' Trilogy. Something that turns the whole philosophy you thought you knew and loved/hated, and totally turns it on its head.  I'll let you know how it turns out!!!
Posted by Brooke at 9:24 PM

oooh nice! I haven't heard of these series but I LOVE the Hunger Games and the Uglies series. I'll be sure to check this out soon!