As you know, it's Banned Book Week!  This is the week we celebrate the books that are wrongly banned from books, libraries, and schools! 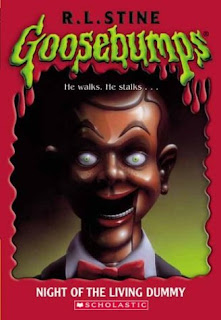 It's Wednesday!  Time to celebrate another 'banned book'.  In this case, we're celebrating a series-- Goosebumps by R.L. Stine.  I don't know about you, but I grew up reading the Goosebumps series.  Every Christmas, I'd receive a handful of new titles. Heck, I still own most of the ones I received those Christmas's!
'Night Of the Living Dummy' and the two books that follow are by far my favorites in the series because they're just so creepy!  That being said, because something is creepy, should it be banned?  Because something may frighten the faint (very faint) at heart, should we pull it off of library shelves?  Bluntly, no.  I get it, some kids might be freaked out by a book about a ventriloquist dummy coming to life, but that is no reason to pull it from library or bookstore shelves.  Just because one kid, or rather one parent, can't understand the macabre style R.L Stine brings to the Goosebumps series doesn't mean another kid won't gobble it it up like there's no tomorrow and thirst for more.
Thoughts?
Posted by Brooke at 7:20 PM