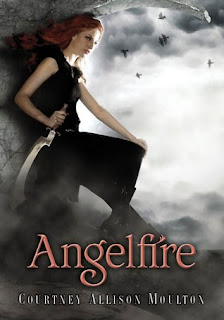 Taken from Goodreads, "When seventeen-year-old Ellie starts seeing reapers - monstrous creatures who devour humans and send their souls to Hell - she finds herself on the front lines of a supernatural war between archangels and the Fallen and faced with the possible destruction of her soul.

A mysterious boy named Will reveals she is the reincarnation of an ancient warrior, the only one capable of wielding swords of angelfire to fight the reapers, and he is an immortal sworn to protect her in battle. Now that Ellie's powers have been awakened, a powerful reaper called Bastian has come forward to challenge her. He has employed a fierce assassin to eliminate her - an assassin who has already killed her once.

While balancing her dwindling social life and reaper-hunting duties, she and Will discover Bastian is searching for a dormant creature believed to be a true soul reaper. Bastian plans to use this weapon to ignite the End of Days and to destroy Ellie's soul, ending her rebirth cycle forever. Now, she must face an army of Bastian's most frightening reapers, prevent the soul reaper from consuming her soul, and uncover the secrets of her past lives - including truths that may be too frightening to remember."


With a release date of February 2011, 'Angelfire' is looking more and more like one of those books that is going to shine. It has good reviews so far on Goodreads and I've seen it in many a 'In My Mailbox' posts here in the book blogging world. (I only wish I was one of those bloggers! :p) Why do I want to read it?  Because angel fiction (apart from one horrible crossover between angels and vampires) has always interested me.  I predict that I'll enjoy this title!


Are you looking forward to this title? Why?
Posted by Brooke at 2:00 AM

Labels: angelfire, SOS of the Week

I just finished this. I liked it even tho I'm not into angels. You can get it at Netgalley.

Alison- I wish I liked reading ebooks... As it stands, I haven't gotten into that trend yet... I've seen so many arcs in ebook form that I want to read!!!