Review: The Haunted by Jessica Verday


Synopsis from Goodreads:
"After a summer spent reclaiming her sanity and trying to forget Caspian, the boy she fell in love with by the bridge where her best friend drowned - the boy who must not exist, cannot exist, because she knows that he is dead - Abbey returns to Sleepy Hollow, determined to leave the ghosts of her past behind.

But Abbey is never going to truly be able to move on from Caspian and Caspian has no choice but to return to her side: for Caspian is a Shade and Abbey is his destiny. The two are tied not only to each other, but also to the town of Sleepy Hollow and the famous legend that binds their fates - a legend whose true ending and dark truths they are only just beginning to guess..."

I found reading 'The Haunted' by Jessica Verday very similar to reading 'The Hollow'. I still stand by the concept of 'The Hollow' series. I love the overall plot of this series. It's fun, inventive, and not commonly seen in YA fiction! And this is all coming from a person who hasn't read the books inspiration, "The Headless Horseman".

'The Haunted' brings us a few months into the future. It's summer and main character Abbey has been 'recovering' from her delusions of seeing and faling in love with a ghost. She's almost convinced herself that Caspian is a figment of her imagination until she returns home. We watch as she tries to keep her life 'normal' and not delve back into the happenings of the year prior, but slowly she is drawn back into the shadow world-- Caspian's world. Once there, she can't let go and can't keep lying to herself about the boy she loves.

I'm a huge fan of Caspian. I like him. Thankfully, much of this book revolves around learning what he truly is and what his limitations are. His interaction with Abbey is always entertaining and quite surprisingly, the sexual tension is written superbly! I say it's surprising, because, well, as a ghost, he can't exactly touch her or she him. A few scenes, even without them touching, made me blush a bit!

Abbey is back narrating this tale and we get a lot of what we got in the original tale-- normal life. We see family dinners, part time jobs, and get a few science lessons. All in all, though, I didn't mind it. I love the parts that involved her mixing scents for her perfumes and discussing her future shop. As far as YA characters come, Abbey's a pretty good role model for teens.

Without going into spoiler territory, I love the new big bad introduced in this novel. I'm looking forward to learning more about him and how he's connected to Abbey. Also, the new creepy khaki kids-- love them! (At least I think! I need to read book three to know for sure!) 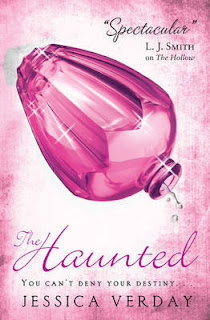 If you read 'The Hollow' you know it ended with many questions and little in terms of answers. 'The Haunted' answers some of those questions-- mainly about Caspian. It also brings a whole new slew of questions to the forefront. I really wish the novel had ended at a different point.

Like the original, 'The Haunted' is l-o-n-g. Almost too long. It would have been nice if the book were 75 (or so) pages shorter, but that's just my opinion. I'm a clear believer that page count doesn't necessarily mean better. The main plot takes a while to get into and the real action doesn't start until the last third of the novel. I would have loved for the main plot to start earlier and the action to come more towards the middle.

Overall, this gets 3 stars out of 5. I love the characters, cute romance, and overall plot, but just wish the main plot points would have come into play earlier than the very end.  Definitely a novel you want to check out!

Here's a quick look at the book trailer for the series: