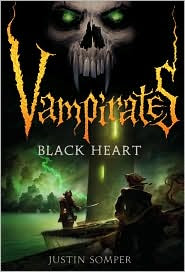 Connor and Grace have seen and done a lot since that fateful night in which they found themselves rescued by different ships. Where Grace has found a deep connection to the Vampiriates' ship, Connor has fallen just as much in love with being a pirate. Now, with their mothers ghost alive and walking, the twins learn the answer to the question they have asked themselves since the beginning-- What is their connection to the worlds they are becoming more and more attached to and what does that mean for their future? Major revelations are revealed that will draw you even further into the 'Vampirates' series!

'Vampirates', as a series, is one of my guilty pleasures. I just really enjoy the characters, dialogue, storylines, and settings-- which is funny, because I typically don't read 'pirate' books! 'Vampirates', somehow, has sucked me in from book one, page one. Book four, 'Black Heart' is no exception. In fact, I think this is one of the best in the series-- especially when you get into the second half of the book.

As usual, the chapters are broken up so we see an equal amount of Grace, Connor, and secondary characters. Also as usual, I loved Grace's storyline. You can definitely see how different the twins really are as this series grows. Grace's storyline had a good mix of revelations, action, and romance.  Lorcan is fantastic, as always.  He and Grace's relationship has evolved well over the series thus far and I am interested in seeing it evolve even more.

Connor's storyline, in the beginning went a bit slow for me, but picked up toward the middle and sailed smoothly along to the end. This didn't surprise me, as I usually find Connors storylines a little bit less engaging. I was surprised at the fact that I was so drawn in to Connor's storyline towards the end of the book, however. I wasn't shifting pages to see when I'd get back to Grace's storyline, like in the previous books.

I don't want to spoil, so I will only say that I love the fact that we finally know who's connected to who and why Connor and Grace are so special. The revelations make me wish I had the money to order book 5, 'Empire of Night', right off of Amazon UK, but I think I'll just have to wait till the US release date of August 2010.

Enjoy the read!!!  And if you haven't picked up this series at all, look for 'Demons of the Ocean', book one in the 'Vampirates' Saga.
Posted by Brooke at 9:16 PM

Good review. Vampires and Pirates - it looks interesting. But a series of 5 books make me sick