Review: Harry Potter and the Deathly Hallows-- The Movie

I saw the first of my holiday movies the other day-- Harry Potter and the Deathly Hallows: Part 1. Here's a few of my thoughts!!! 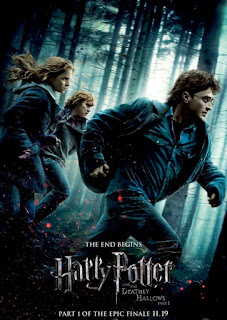 The Book:
Before going into the movie, I'd just like to give you an idea of what I thought about about the book... Overall, I gave this final Harry Potter book 3/5 stars. Rowling did a good job at writing a fitting ending to the story. I knocked it off a few stars because of a problem I've had with JK Rowling's style since 'Order of the Phoenix'-- the editing. No one wanted Harry Potter to end, I know that, but the book could have been shorter. The treasure hunt for the Horcrux's never really caught my interest and honestly, I can't say I remember much of the literary details given in the first half of 'Deathly Hallows'.    The second half?  I enjoyed it quite a bit, but I'll save the details for the Part 2 movie review.  :-)


The Movie:
Just like the movie adaptation of 'Order of the Phoenix', I enjoyed Part 1 of 'Deathly Hallows' quite a bit more than reading it.


Here's a few free form thoughts about the movie!


The Final Verdict:
If I had to rate this, it would get 5/5 stars.  Everything was done just right, even the sad bits.
What did you think of Harry Potter?  Share your thoughts!
Posted by Brooke at 12:18 PM

Melissa (i swim for oceans) said...

Excellent break-down and review, Brooke! I LOVED the movie, too, though the scene where Ron saw the Horcrux vision of Harry and Hermione bloody well creeped me out ;)

Great review and I agree with you. My one anxiety is that people who haven't read the books and are only casual fans of the films would have been confused by all the characters, like Dobby, who haven't been seen for several films. But for people who've read the books - brilliant! (I was so pleased to finally see Bill Weasley!)

Melissa- I agree!!! The scene between Harry and Hermione creeped me out, too. I think it stem from never actually shipping Harry/Hermione. The idea never came to mind when reading the series. Ever.

The movies, however, seem to be very heavy with the Harry/Hermione relationship. They seem to have a very touchy/feely friendship happening!

Katie- I'll have to ask my friend who hasn't read Harry Potter if he was confused. It would be a lot to take in if you are only an occasional watcher of the movies!!!

Yes, Bill was a nice introduction. I was wondering what they were going to do with that!

How interesting that you thought the movie was better than the book. Can't say I agree but it was interesting reading your thoughts anyway!
I'm so happy they gave Rupert more to do in this movie, too! And no, there definitely was no hint of Harry/Hermione in the books. They played up that angle purely for the movie.