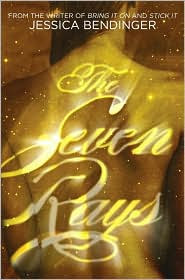 Beth is your normal teenager—smart, boy crazy, and looking forward to college. That all changes when she starts seeing things she shouldn’t. People are suddenly connected by stings of light, some coiling around, some sucking energy from others, some covered with knots. Then, out of the blue, notes in gold envelopes begin being sent to her under a name she doesn’t know, but seems somewhat familiar. Crazy, she thinks so, that is until she uncovers things her mother had tried to keep secret Beth’s entire life. Things that make everything that is happening to her seem a little less crazy and a little more real.

I had no idea what to expect from a book written by screenwriter Jessica Bendinger (Bring it On, Stick It). The voice in The Seven Rays took me a while to get used to and definitely reminded me of Bendinger’s previous work. Eventually, though, as the story progressed, I found it easy to ignore the valley-ish teen references Beth uses throughout the book. There is romance—instant romance—between Beth and college boy Richie Mac.

That being said, the point of the story goes far beyond teenage romance. Reading it was almost like reading a New Age title. The lights Beth sees are eerily similar to the cords that supposedly connect our beings to others and the scene with the ‘energy vampires’ was almost frightening (to think of meeting someone like that!).
A word to parents—sex is mentioned throughout the novel and the tension is there. What happens romantically is not vulgar or detailed so no worries there.

Overall, the messages that come through this book of forgiveness, kindness and thoughtfulness make me recommend this title to teens. The story is only just beginning, as there are many unanswered question thrown into the mix. The Seven Rays is available at bookstores everywhere.