Review: The Dead and the Gone by Susan Beth Pfeffer

Title: The Dead and the Gone
Author: Susan Beth Pfeffer
Genre: YA, Post-apocalyptic
Perfect for: readers of its companion novel, Life As We Knew It 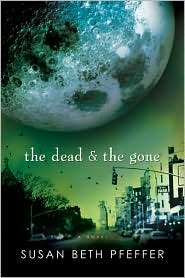 We've seen what happened to the suburbs when a meteor moved the moon closer towards the earth. In "The Dead and the Gone", companion novel to "Life As We Knew It", we see how the disaster changes life for those in the fast paced cities, namely New York City. The story centers around the Morales family. When both Alex's parents disappear the night of the disaster, it becomes his duty to keep him and his two sister, Bri, 14 and Julie, 12, alive in a city that is slowly falling apart. The repercussions of the movement of the moon differ from the story we heard in "Life As We Knew It", but are just as chilling. Alex must deal with a lot-- food shortages, failing electricity, an ill sister... They need a lot, but most of all, seventeen year old Alex knows he needs to get him and his family out of the city before it exists no more.

Oh my goodness. I don't know what I expected while reading "The Dead and the Gone". I enjoyed the book immensely even though it never ceased to depress me. The characters seemed real and I really felt for them. Towards the end, the book almost brought tears to my eyes, which is unusual for me!

By no means should "The Dead and the Gone" be taken as 'the same old thing'. It reads similar, yet completely different to its companion novel. One of the most intriguing things was, at times, something would affect Alex and his sisters, and I would stop and be brought back to what happened to Miranda in "Life As We Knew It".

I really enjoyed this companion novel and can't wait until the third book in this series, "This World We Live In" is released. I recommend "The Dead and the Gone" for teens and adults who find themselves the least bit attracted to the story. It's definitely a page turner!
Posted by Brooke at 4:54 PM