Title: Wired
Author: Roin Wasserman
Genre: YA, Sci-fi
Perfect for: Well, anyone who wants to read the conclusion of the trilogy
Star Rating: 2/5 stars 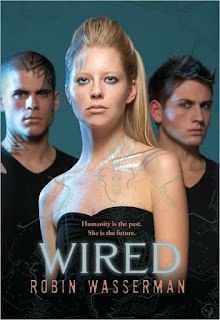 Lia Kahn is a mech-- a machine with memories and feelings of the deceased Lia Kahn. 'Wired' is the third book in a trilogy that follows her, her family, and mech friends as they learn if peace can really be had between orgs and mechs.

Okay, folks, if the 2/5 star rating didn't tell you, I'm not a fan of 'Wired'. I was on board with her first two titles and typically recommend them for those looking for good sci-fi. This book, however, not so much. There are low points and very few high points in 'Wired'.

Let's start with the high points, shall we? 'Wired' showcased a lot of Zo, Lia's 'org' sister. We've seen the relationship crumble in the earlier books and it was nice to see the sisters rebuild their bonds. Their banter back and forth was cute, especially when Jude was involved.

Jude is the other high point of the novel, and for no other reason than I've always found him a bit intriguing. He's the Han Solo character who you have to root for, even if he's a scoundrel.

Now onto the shortcomings... And boy were there shortcomings! The main problem is the writing. Lia's voice has always been a bit hard to follow, but this was way worse. Conversations were hard to follow and action was just confusing. So many new plot elements were introduced, only to be left open-ended and unfinished.

Even the main story of this novel and this series was pretty poorly executed. I understand cliff hanger endings when you're reading the first or second book in a trilogy, but if you are finishing the story, never visiting that world again, why not at least resolve the main storyline? Preferably in a way that isn't completely confusing to the reader. I kid you not, I had a lot of trouble following the last few chapters. I still don't know what exactly happened to Lia. If you have any idea's, please leave them here, because I'd like to know.

This whole novel rubbed me the wrong way. I expected something that would wrap up Lia's story, but got a whole lot of crazy plot lines and no real conclusion. It felt a lot like the third book in a four book series.

I would NOT recommend this unless you have read the first two books and feel you need to finish the series. And what does that mean for me recommending the series to new readers? I don't know. Maybe I still will, maybe I won't. I really hope Wasserman is considering writing a companion following two specific characters (you'll know who if you read 'Wired') and left this book without much conclusion because of that.  Even as I think about that, though, I might be hard pressed to pick up another novel in this series...

This book was just highly disappointing.
Posted by Brooke at 10:06 PM

That sounds frustrating. I hate getting to the end of a stand-alone book or a trilogy and still having tons of unanswered questions!

AGREED! To prety much everything you said. I wrote a review about this one a week or so ago - I had the same issues with it. I'm glad I wasn't the only confused one in the end. I'm just really hoping there's going to be a companion novel to clear it all up. Fingers crossed!