Title: City of Ships, Stravaganza #5
Author: Mary Hoffman
Genre: YA, fantasy, slight romance, adventure
Perfect for: young and old YA readers who have read the past books in this series 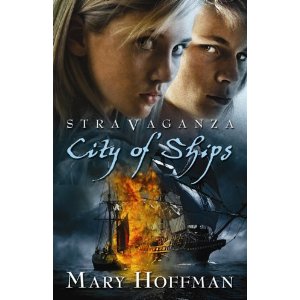 Isabel always feels like the runner up when it comes to her and her brother. She's not as smart, athletic, or popular as him. When she falls asleep with mosaic tiles she found in an italian style bag at school and suddenly wakes up in Classe, a Talian town, all that changes. Classe is in danger of being attacked and it seems Isabel is the only one who can save them.

You know those books that stay with you, even when you've closed them for the night? 'City of Ships' by Mary Hoffman is a perfect example of a book that does just that. 'City of Ships' is written drastically different from the other books in the Stravaganza series.

With the number of London based Stravaganti growing, the story is based as equally in Talia as it is the real world. This change, while startling at first, made for an interesting look at the current Stravaganti in London. I couldn't imagine having the power to go from Talia each night and not have it effect regular, daily life. It was nice to see the relationships between those who have traveled to Talia and how those travelers related to those who haven't traveled to Talia. And, I have to say, I always get a kick out of when the old Stavaganti figure out who the 'current' one is (in this case Isabel), leaving the 'current' Stravaganti to figure out why they're so interesting all of a sudden. It still makes me smile. And that little bit of romance between Isabel and another Stravaganti? Loved it.

Isabel wasn't annoying. Quite the opposite, I liked her perspective. She could have come off as whiny, as characters usually do when jealous of a sibling, but she doesn't. She has quite a grown up air to herself, actually.

As always, the characters in Talia are fantastic. Flavia and her son, the rogue pirate Andrea, were engaging characters. I almost suspected some sort of romantic storyline between Isabel and Andrea, but we'll see what happens with that in future books. (Though I doubt anything will now!)

I found the story to be a little less focused on Isabel's 'issue at hand', in this case her feeling second fiddle to her twin brother, but still enjoyed the storyline for this fifth installment of the Stravaganza series. The role her brother did end up playing in the story was unexpected and very different from something typically found in this series. I did find some odd loose ends in this novel. I'd like to see what comes of Flavia's son and Isabeb's pirate friend Andrea. And also, the biggest question on my mind after finishing: what did Luciano's mother want to tell her son? It's probably nothing big or surprising, but I want to know! Seriously, I'm waiting for the day when the Mulholland's travel to Talia to see him, to perhaps see a wedding or at least meet Arianna.

I really enjoyed 'City of Ships'. I loved the friendships, the hints of romance, and Talia in general. This series as a whole is one of those that everyone should read. So, if you haven't picked up this series yet, check it out!!!

'City of Ships' is on store shelves now and available at your favorite online bookshops!
Posted by Brooke at 11:50 AM