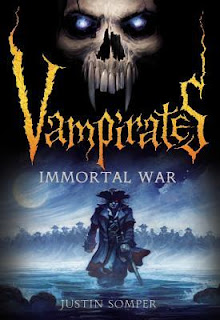 Taken from Goodreads, "A bloody war is raging across the oceans, with the Pirate Federation and the Nocturnals allied against the renegade Vampirates led by Sidorio and a heavily pregnant Lady Lola. Meanwhile, Connor and Grace Tempest each have their own important roles to play- He as a pirate warrior at the heart of the battle, she as a powerful healer working with the war-wounded. As the twins face their greatest challenges yet, old allies and former foes return for the ultimate battle..."

I started this book with trepidation.  I loved the first five books in the 'Vampirates' series and knew full well that this was the last full length adventure I'd get to spend with Grace, Connor, Lorcan, and the rest of the Pirate and Vampirate crew.  Now that I've finished it, it is with a touch of sadness and a whole lotta love that I write this review.  I'm going to keep it short and sweet because I don't want to go into heavy spoiler territory by accident!  (It's just *that* good of a series!)

Justin Somper has crafted an epic finale to the series that started very simply with a book about two fouteen year old twins who were forced down two completely different paths.  'Immortal War' has everything-- action, romance, humor, and very readable battle scenes.  That last one is a huge thing for me-- I usually don't read books with heavy action scenes and if they're in a novel I'm reading, I usually just skim the passages.  I didn't do that with 'Immortal War'.  Better still, with so much happening to so many characters at one time, I still found it easy to understand what was going on where and to whom.

The big finale seemed a fitting send off to the characters I've grown to love.  Most loose ends are tied up.  Some are surprisingly left open making me wonder if we'll be seeing a few more novellas or even a companion series.  (Please, Mr. Somper!!!)  There are a ton of secondary characters who still have stories to tell and I, for one, would love to hear them (*cough*cowboy*cough*).

If you haven't read the 'Vampirates' series, go to your local library and tell the librarian you want to read 'Demons of the Ocean'.  You won't regret it.  And to those who have read the series and are putting this read off till 'next time', make 'next time' today.

I'm very happy I decided to follow Grace and Connor on their journey.  I have to laugh at myself-- I was hesitant to start this series back in the day.  'Vampire pirates? What are these authors going to think up next?', I said to myself.  But the beautiful cover and intriguing concept eventually won me over and the hardcovers now sit proudly on my bookshelf, ready for when I want to dive back into the lives of the Tempest twins.

'Immortal War' gets 5 stars and is available online and in stores.
Posted by Brooke at 2:30 PM