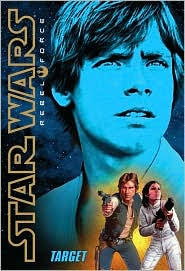 After years of depressing EU novels, this is a refreshing breathe of fresh air. Rebel Force: Target by Alex Wheeler is a book I am so happy to have given a shot. This series takes place shortly after A New Hope and stars our heroes Han, Luke, and Leia, along with other favorites. The series is a glimpse of what happened to get the group to get them from A New Hope to The Empire Strikes Back.

In Target, Han, Leia, Luke, and the droids are sent to Muunilinst to gather secret funds that Alderaan housed there. With Alderaan destroyed, they need them and need them soon if they are to deal with the Empire, which is on there tail. But there is an unsuspecting traitor in our heroes mist who only wants to please the Empire.

Target has what you've come to expect from Star Wars EU with out the depressing story lines and character deaths. I suggest that if you are a fan of star wars, young and old, you pick this up. Perfect for the age group it was written for (8 to 12), but also perfect for those adult EU fans who don't want to continue past NJO or LotF and want to feel the sense of escapism they found originally in the SW universe.
Posted by Brooke at 5:01 PM