Title: Mockingjay (Book 3 in the Hunger Games Trilogy)
Author: Suzanne Collins
Genre: YA, Post-apocalyptic, romance, action
Perfect for: those who have read the series, starting with 'Hunger Games'. 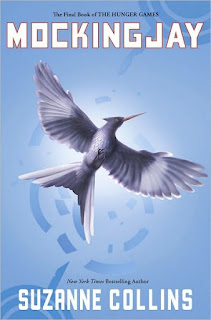 Katniss has been thrown into the Hunger Games twice now and each time has survived, mocking the governing power called The Capital. On the brink of war with the districts, the Capital doesn't like that one bit. No one is safe as the rebellion that was only just beginning in 'The Hunger Games' is now at full force in 'Mockingjay'.

Without going into spoiler-ville, let me just say that I loved this conclusion to the Hunger Games Trilogy. The whole series has been pretty dark and this book definitely followed suit. That being said, Collins ended this series perfectly. It is heartbreaking, gut wrenching, gasp making, and pretty much a whirlwind of a read.

'Mockingjay' starts off a bit slower than the other two novels, but rest assured, picks up quickly once it reaches part 2 of the story. Because the focus of 'Mockingjay' isn't just another Hunger Game, 'Mockingjay' has a lot of surprising turns and allows for plenty of character development, specifically in the case of past Hunger Games contestants and best friend Gale.

One of the best things about 'Mockingjay' is that Collins keeps everything real. Nothing is sugar-coated, all the way down to the hunger games impact on the psyche of the heroes we've grown to love. This is truly a story that people will remember.

'Mockingjay' is available online and in stores now!
Posted by Brooke at 8:23 AM

I haven't read any books in this series...I've certainly noticed it around....

Thanks for stopping by my blog.

I finished reading Mockingjay in the wee hours of the morning. It's just hard to say how I feel at this point. It's been a while since I've been impacted by a story lke this. It's the best of what makes us love to read.

Great review, I loved the first two in the series...can't wait to read this one. Hopping by on the bloghop!

Laurel- I recommend taking a peek at Hunger Games. I didn't think I'd like it when I started, but was very much mistaken!!!

Melissa- It is hard to put the whole Hunger Games trilogy into words. It's one of those series, this book especially, that takes days to really absorb...