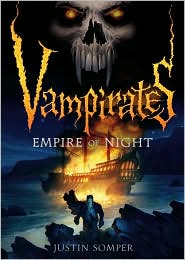 *Note:  This review has minor spoilers, because, well, the fifth book of a series is hard to review without giving away something!!!  You have been warned!

"Twins Grace and Connor Tempest, still reeling from the recent discovery of their true parentage and its explosive implications, are thrust deep into the heart of the conflict between Sidorio, dangerous Vampirate, and the Pirate Federation. As old friends and foes are thrown together unexpectantly, the twins find their allegiances shifting in ways no-one could ever have imagined... Join the Tempest twins in this fifth dramatic encounter as they battle for the empire of the Vampirates." - Summery taken from Vampirates webpage.

Had you told me Sidorio would become a family man after my original introduction to the Vampirates series, I would have bet you ten bucks you were wrong. Then, upon reading 'Empire of Night', you would be ten bucks richer. I'm usually pretty good at guessing plots, but this book kept surprising me!

Let's talk character development... So good. In fact, it was so good that I found myself talking to the book-- scolding characters for their actions, asking why they were doing this, or how they could even consider that! And I'm not talking about just Connor and Grace-- I mean the whole cast of characters.

While Connor and Grace do a lot of changing and growing during the course of 'Empire of Night' (due to the fact that they are dhampirs aka half vampire), the growth of the secondary characters is one of the many strengths of this novel. Characters like Jez, Bart, and Johnny are fleshed out even further than they have been before. Johnny, especially! I have to admit, I love Johnny's character, even if he's working for the wrong side. His dialogue with Lorcan at the end of this novel is fantastic-- I laughed quite a few times at the exchanges, especially Johnny's comment about Lorcan knowing Grace since she was a baby. Great stuff.

The great thing about the characters in this series are that none are inherently completely evil. Yes, Sidorio is not a good role model and is for the most part 'bad', the way he instantly cared for Grace and Connor touched me a tiny bit. And his wife, Lady Lola, however bad she is, has some great scenes in 'Empire of Night'. I could go on, but I won't bore you with the awesomeness of the rest of the cast, as I'm sure if you have read the series, you already know...

Onwards to the story... It was certainly unexpected. Like I said in my opening, this plot totally snuck up on me. The story is focused heavily on the twins, Sidorio, Lady Lola, and their Vampirates crew. We see some of our old favorites, like Lorcan, Darcy, or Mosh Zu, but they aren't featured as heavily in this title as in past books. Funnily enough, keeping with suit, while Connor and Grace are the closest they've been for a long time, they still hardly interact with eachother. It was a bit odd at first, to tell you the truth, but they each had their own roles to play, so I guess it made sense. Again, chapters pretty much alternated between Connor and Grace's POV and, to my surprise, I found both very interesting. To an even great surprise, I found myself thinking that Connor, yes Connor, was playing his role far better than Grace! I seriously wanted to ring her neck a few times during 'Empire of Night'.

Someone on Goodreads mentioned that the book was 'stressful' and I totally 100% agree. Stressful in a good way-- a very good way. The story was so addicting and the characters were so compelling that it was pretty easy to sink into this title and not come back up until I was completely torn apart by the action, romance, and tragedies found in 'Empire of Night'. Yes, there are all three in this title. And all three are done very well.

Word to the wise-- if you haven't read any book in the Vampirates series, do not read this one. Start with the first book, then continue on through the rest and till you get to this one.

So far, I must say this very well could be the best of the series thus far. They just keep getting better and better.  All in all, this is a fantastic edition to the Vampirates series!
Posted by Brooke at 10:52 PM