Review: The Summer Before by Ann M. Martin

Title: The Summer Before- A BSC Prequel
Author: Ann M. Martin
Release: April 1st, 2010
Genre: Juvi, pre-teen, friendship, coming of age
Perfect for: 8 and up, kids looking for fun, friendship reads, and those twenty somethings who loved the series as kids 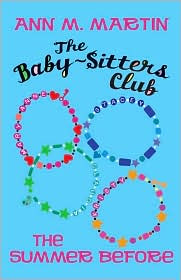 It's the summer before 7th grade and Kristy, Claudia, and Mary Anne are psyched.  Set before 'Kristy's Great Idea', 'The Summer Before' shows us the trio transitioning into teens, or at least pre-teens.  Kristy is dealing with her moms growing attachment to boyfriend Watson, Claudia feels she is 'growing out' of her friends, and Mary Anne is trying to break out of her shell while dealing with an over protective father.  Meanwhile, Stacey is getting ready for a big move from New York City to Suburban Stoneybrook, CT after recently being diagnosed with Diabetes.

It was fun revisiting the Baby-Sitters Club (BSC) gang-- at least the four featured in this book.  It's been years since I've read this Ann M. Martin series but I am pleased to say it read (felt) like revisiting an old friend.  The style and rhythm felt natural and the story was quick and entertaining.  It's a short, light story, so those who want to read it out of nostalgia should have no problem.

Off all four story lines, Stacey's was the most interesting to me.  I don't remember the original series going much into the reason for her move other than a quick sentence or two (though it's been a while-- I could be wrong). In pure BSC fashion, the message that you shouldn't be scared of friends with health issues came across very clear due to Stacey's story.

While I would have preferred a sequel, a prequel makes more sense when it comes to re-branding this story for this generation.  'The Summer Before' gives us a good look at how the members of the (soon to be formed) BSC stay friends, even though they are all maturing in different ways.  'The Summer Before' is available now online or at your local bookstore!
Posted by Brooke at 10:29 AM