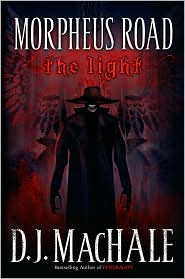 Sixteen-year-old Marshall led a pretty normal life-- that is, until two key things happened. First, his best friend Cooper disappeared while at his families lake house. Second, he began being haunted. Worse, he's being haunted by a ghost who looks exactly like the creepy 'Gravedigger' he's been drawing for months. Together with Coopers' sister Sydney, Marsh takes it upon himself to find his friend, while trying to survive 'Gravedigger'.

As a fan of D.J. MacHale's Pendragon series, I was pretty hungry for this book! 'Morpheus Road: The Light' was a quick, action packed read. It definitely has a supernatural, spooky feeling to it that should please those who like to scare themselves with RL Stine or Christopher Pike.

The pro's of this book? I like the characters. I think Marsh and Sydney have good chemistry. Whether or not it will go the romantic chemistry route is still yet to be seen, but the two play off each other well. Coopers character is great because he is so different from Marsh. Where Marsh is still interested in shooting rockets and drawing, Cooper is more into, well, getting in and out of troubling situations. Their friendship brings in an interesting dynamic-- two best friends who are the opposite poles (if you will) of teenage-hood.

It was interesting reading a ghostly tale by DJ. Being so used to his fantasy worlds, I was a bit worried. Thankfully, 'Morpheus Road: The Light' didn't come out cliche, like other ghost stories directed at pre-teens and the ya audience. Worried about how scary it may be? While spooky at times, it never crosses the line into frightening. It seems just right for kids twelve and up.

The cons of this book? Like the first 'Pendragon' book, you can tell this is the 'introduction' book. Its goal? Tell the readers 'who', 'what', and 'where'. It has a story with a beginning middle, and end, but a lot of it is focused on learning about the series environment. Questions are thrown at you and you really don't get many answers to most of them. It took me almost half the book to really get into this supernatural tale, so expect a slow beginning. ('Merchant of Death', the first book in the 'Pendragon' series read similarly for me, but eventually became one of my favorite series.)

Overall, I enjoyed 'Morpheus Road: The Light'. It looks to me like D.J. has a solid series on his hands. While not everything in the book impressed me, I enjoyed it enough that I will definitely keep an eye out for future books.
Posted by Brooke at 11:02 PM