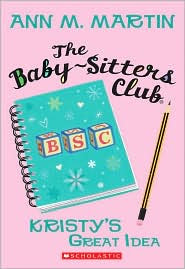 Set after 'The Summer Before', 'Kristy's Great Idea' follows pre-teens Kristy (tom boy), Claudia (artist), Mary Anne (quiet and studious), and Stacey (fashion/boy expert) as they decide to start a club based around baby-sitting-- The Baby-Sitters Club.

Short description for this title, as I think that one sentence pretty much says all you need to know about the first book in the Baby-Sitters Club series.  Edited for todays generation, 'Kristy's Great Idea' should have no trouble catching the interest of pre-teen girls, as well as those us who just want to 'catch up' with the gang after years of being out of print!

Since the boom of fantasy and sci-fi titles in juvi fiction, it's been hard for me to really find titles for the younger set that have a good story and lots of heart.  'Kristy's Great Idea' has both of those qualities and more.  'Kristy's Great Idea' is a quick read with interesting characters and a great premise.  Girls will find it easy to relate to any one of the four main characters featured in this novel as they are all unique and likable.  The story is equally great as it has a definite girl power theme to it.  Also, in this day and age where most kids get huge allowances (or on the opposite end, no allowance at all), 'Kristy's Great Idea' might just inspire kids to work on something like this in real life.

As mentioned above, this is officially the first book in the Baby-Sitters Club series, not to be confused with the recently released prequel, 'The Summer Before'.  There are pro's and cons to reading one before the other.  'The Summer Before' gives you a nice introduction to the characters, but 'Kristy's Great Idea' has a bit more action.

'Kristy's Great Idea' is a great book for any pre-teen girl interested in a more 'real life' storyline.  Even though it was originally published in the late 80's, it reads (thanks to small edits) like it was written for todays audience.  Highly recommended for those looking for a good girl power, coming of age series!
Posted by Brooke at 4:43 PM