(This has spoilers, mainly on the changes made to the story.  You've been warned.)

Published in 2005 by Meg Cabot, 'Avalon High' is one of my favorite books.  Originally when Disney picked up the rights, I was excited.  Now that I've seen it, I think Disney missed the mark a bit.  'Avalon High' was a decent Disney special, best watched by those who haven't read the book.

The Synopsis (From Disney Movie Guide)--

Avalon High at first appears to be a typical American high school to Allie Pennington, a transfer student, but soon the perception changes. Allie begins noticing unmistakable similarities between her new school and the legendary Camelot, and as the story progresses, Allie becomes obsessed to the point that she is convinced it's up to her to solve the mystery lest history repeat itself."

The cast-- All in all, I liked the cast.  They were all believable in their roles, even down to main character Allie's quirky parents. The two leads Brittany Robertson and Gregg Sulkin  (as Allie and Will respectfully) played off each other well and were pretty similar to what I pictured while reading the book.


The story--  All adaptations have changes.  I understand that.  And 'Avalon High'?  Well, in the beginning, I was okay with the changes.  The addition of Miles, the Merlin of the story, was fine with me.  The foreshadowing in the dreams about what was to come?  I was okay with that, too.  And with those minor changes, they also hit on some key factors of the book.  Running through the woods, seeing Will in his 'spot'-- loved it.  (I would have loved to see scene where Will unexpectedly arrives at Allie's house and surprises her on 'Spider Rock' and the confession scene in the woods, but alas, we weren't treated to those!) 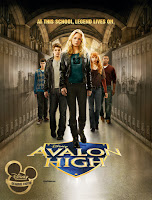 The part that hurt this adaptation?  The last 15 minutes.  That is when the story went from a decent adaptation into 'what the heck were they thinking' territory.  I should have seen it coming and half of it I did.  I knew that Marco wasn't going to play the same role as he did in the book and I had the teacher pegged from the beginning, but when it comes to who the true reincarnation of Arthur turned out to be?  Shocked.  (See more below on my opinion on that...)


My Final Verdict-- It was turning out so decently until the end.  If you haven't read the books, I think you might enjoy this movie.  It wasn't up to par with the greats-- Halloweentown, High School Musical, or Brink-- but was watchable.  If you've read the book series, be prepared for major changes.  My rating: 3/5 stars


*MAJOR SPOILERS ON ENDING*
I'm all for girl power, but the story had a good amount of girl power as originally written. There was no need to make Allie the reincarnation of Arthur and Will no more than a knight.  If we are meant to believe Allie is playing Arthur's role, than the famous love triangle of Lance, Gwen, and Arthur plays no real role in this.  Changing the Arthur reincarnate character down grades the story-- a lot!
*MAJOR SPOILER OVER*


What did you think of the movie?
Posted by Brooke at 7:17 PM

I've never heard of this movie! Also I never heard of the book. I read the spoilers anyway. ^_^ When adaptations leave things out and/or make major changes to significant plot/character events, it usually really bugs me. I can see why you might not have loved those parts.

I wanted to watch this movie! Once I saw the commercial for it I thought it was a show but it seems really good1 Perhaps next time they show it i'll watch! Also i'm a new follower! Found out about your blog on bookblogs.ning.com

hmm i may have to watch it when it comes back on.
LOL Brink!! i used to watch that one every time it was on, Erik Von Deton was so dreamy in that movie. then he got older and meh.

i may have to watch it when it comes back on, im usually watching DVDs or something though.

OMG BRINK! geeze i remember watching that whenever it came on XD

btw thanks for visiting my blog, i am now watching yours.

Bea- I recommend reading the book before seeing the Disney flick!

Book Kritik- I suggest watching it. It wasn't bad in a production sense.

LunaMoth- Brink is one of my favorites. I wish they'd rerun it more!! I agree on Erik Von Deton. He didn't age well.