Forever Favorites: Heirs of the Force by Kevin J. Anderson and Rebecca Moesta

We all have our favorite books, books we can't imagine not reading over and over again.  Here's another one of my 'Forever Favorites’... 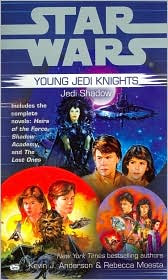 Originally published in 1995, "Heirs of the Force" by Kevin J. Anderson and Rebecca Moesta is another of my 'forever favorites'.  I'm a huge Star Wars fan and of all the expanded universe novels, the Young Jedi Knights series is my favorite.  "Heirs of the Force" is the first in that series.

Fourteen-year-old twins Jaina and Jacen Solo are off to Luke Skywalkers Jedi Academy to be trained by Uncle Luke and other jedi masters in the ways of the Force.  The twins are force sensitive in different ways-- Jaina with mechanics and Jacen with animals. The twins quickly make friends in Lowbacca, Chewie's nephew, and Tenal-Ka, a Hapen warrior.  While practicing in the jungle, the four stumble upon an old Tie Fighter-- and its pilot who's been living in the woods since the crash!  Will the Young Jedi Knights be able to convince the pilot that his ties to the Empire don't matter anymore after all those years of surviving the jungle waiting for his call home?  Read "Heirs of the Force" and find out!

As mentioned above, I love the Young Jedi Knights series and this book is a great introduction to the characters and setting.  You don't have to be a Star Wars wiz to understand the books.  You don't even need to have watched the movies, though it would help!  "Heirs of the Force" is aimed at 10 and up, though younger and older Star Wars fans should enjoy this book and the following eleven books in the Young Jedi Knights series.

All the books, including "Heirs of the Force", have a great mix of action, adventure, humor, and life lessons.   The characters are interesting to read about and the plenty of characters from the movies pop in, as well.  The best part of the Young Jedi Knights series is that they read like a popcorn flick--  nothing you have to think on too much.  All you have to do is sit back and enjoy the adventures the Solo children and their friends find themselves in.  Highly recommended!!!