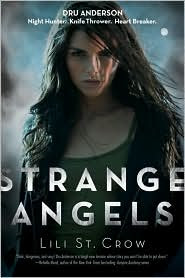 Dru’s life wasn’t normal, she knew that. Traveling around with her father and taking care of herself when her father was hunting creatures that most believed to not exist was just how it was since the disappearance of her mother years ago. When Dru’s father goes missing on a hunt, Dru finds herself running from werewulfs, zombies, and other fabled creatures. Along for the ride is Graves, an awkward high school boy who befriends Dru just as these events start, and Crisophe, a mysterious boy who is convinced Dru is much more than a normal girl.

While I can’t say I devoured Strange Angels, I do recommend this book. It has all the elements a good intro novel should have. Strange Angels is very action packed and reads much like a Supernatural episode. Romance is not the main concern throughout this novel but is hinted at. I’m sure as the characters get closer to each other, we’ll see much more in that department.

For the visual, here's the official book trailer for Strange Angels: