Review: Give Up the Ghost by Megan Crewe

Title: Give Up the Ghost
Author: Megan Crewe
Genre: YA, Supernatural
Perfect for: A rainy afternoon read 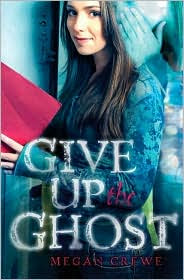 Cass has seen ghosts since her sister died four years ago and she uses it to her advantage. The local ghosts that haunt her school are her friends, feeding her information to use against any living classmates who dare to antagonize her. When the VP of the Student Council learns what she can do, Cass has no options but to help him with his request—contacting his dead mother. The dead mother part is easy, but Tim has problems that Cass can’t solve in her normal ghostly ways. Out of touch with the living for so long, she needs to learn how to help Tim when he needs her the most.

*Spoilers in review—you’ve been warned*

“Give Up the Ghost” is a strange blend between a ghost story and an after school TV special. It’s a simple, quick story perfect for a rainy afternoon. Cass is your typical ghost seeing rebel, but is fleshed out enough to be fun to read about.

The story is compelling, though I found it to read almost like two separate stories. This is where the ghost story/after school special bit comes in. The first part was definitely your typical ghost story. We see Cass dealing with Tim’s mothers’ ghost and even helping her cross over. As for the latter half of the book, it was pretty much ghost free and was more centered on Cass helping Tim with his depression/alcohol problem. I understand that the premise of the story is for Cass to get in touch more with the living and less so the dead, but I don’t think a happy medium was ever found between the two stories being told.

I hope there is a sequel in the mix, because I think Crewe left a lot of questions unanswered. Who is Keith? Why was he staring so intently at her? What does her sister need to cross over? Is Tim really over the drinking? What will become of Tim and Cass? (Personally, I don’t like Tim very much and am hoping if there is a sequel that another love interest comes into play.)

Even with the slight story problems with “Give Up the Ghost”, I do recommend this title for readers who need a quick read. It’s not something I would run out to the bookstore and buy, but is definitely something I’d pick up at the library.

For the visual... Here's the book trailer!

Labels: Give Up the ghost, Megan Crewe, review, Supernatural, YA