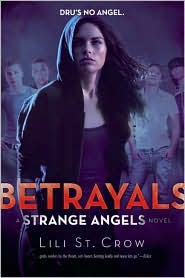 In Betrayals, On Cristophe’s urging, Dru and the shapeshifter Graves find themselves at a school used to train djamphirs and werewulfs in their abilities. You would think the school would feel safe and secure, but something is wrong. The teachers refuse to train her, her best (only) friend is becoming arrogantly popular, and someone is out for blood--- mainly Dru’s.

In all honestly, I don’t know if I’m ever going to love a book in this series. I enjoyed Betrayals, but still had issues with certain things. To start out with the pro’s—the story had a good mix of characters. I liked the new characters that were introduced in Betrayals, especially Dibs, the shy werewolf. The romance was under played, but what was featured was really well done. The triangle is written so well that, like Edward and Jacob, you will definitely pick a side. (I’m team Christophe, by the way.)

I don’t know if it’s action in general or just the authors’ action sequences, but again I found myself skimming over a lot of the action bits in the book. They just didn’t hold my attention. Also, even with the new characters, there still was a whole lot of Dru alone. I’m all for characters contemplating decisions and things on their own, but I found it was done too much in Betrayals.

Overall, if you enjoyed the first book in the series, I recommend taking a peek at this book. It is a nice addition to a good supernatural action series.
Posted by Brooke at 9:38 PM