It's that time again-- Banned Book Week.  This is the week we celebrate the books that are wrongly banned from libraries, bookstores, and schools everyday.  I'm a huge believer that you should not ban any book, regardless of your thoughts on it.
Each day this week, I'll be posting a banned book or series I happen to love.  I encourage you to do the same! 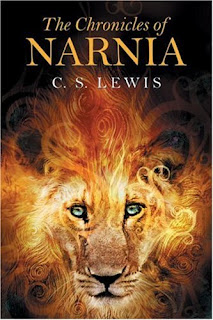 Mondays Banned Book/Series is none other than C.S. Lewis's 'Chronicles of Narnia', banned usually due to the religious themes in the titles.  There are two ways to read this series.  It's quite easy to read it purely as a fun fantasy tale and just as easy to read it as a fun fantasy with religious themes.  In my opinion, this book isn't preaching anything unless you read it looking for religious references.  And even if you are, what harm comes from thinking of Aslan as God or Narnia as Heaven?  I've read many books about characters that have drastically different religions than me and I would never think of banning them just for that reason.

What's your banned book for Monday?
Posted by Brooke at 8:15 PM

Hi Brooke!
Thanks for sharing about your banned book coverage! Today I finished reading A Wrinkle in Time for Banned Books Week! Stop by Wed. if you get a chance to check out the review and let me know if you've read it yet!

Suzanne, I don't understand why A Wrinkle In Time would ever be banned! I don't remember anything objectionable about it. I'll def. stop by your blog to read your review!