Review: The Hunt by Andrew Fukuda 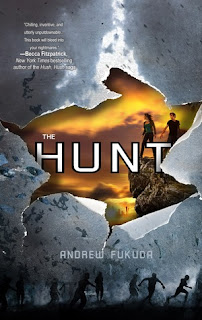 Taken from 'Goodreads', "Gene is different from everyone else around him. He can’t run with lightning speed, sunlight doesn’t hurt him and he doesn’t have an unquenchable lust for blood. Gene is a human, and he knows the rules. Keep the truth a secret. It’s the only way to stay alive in a world of night—a world where humans are considered a delicacy and hunted for their blood.


When he’s chosen for a once in a lifetime opportunity to hunt the last remaining humans, Gene’s carefully constructed life begins to crumble around him. He’s thrust into the path of a girl who makes him feel things he never thought possible—and into a ruthless pack of hunters whose suspicions about his true nature are growing. Now that Gene has finally found something worth fighting for, his need to survive is stronger than ever—but is it worth the cost of his humanity?"

'The Hunt' is a quick read with a slightly similar storyline to the Hunger Games.  The idea behind the 'human hunt' is that the human population be controlled through means of a battle royale (of sorts) between the thriving alien species and the remaining human population.

As far as covers go, I like the cover design on 'The Hunt'.  It's an engaging cover with some fun elements.  I love the ripped cut out showing the two lead characters.

In all honesty, it's not my favorite dystopian read.  The pacing was off through the entire novel.  The beginning felt slow and the ending felt rushed.  I wasn't surprised at the big reveal 200 pages in, either.  I had it pegged very early on.

The world was crafted well enough and, unlike some dystopian worlds, I had no problem figuring it out.  The world has some unique bits that separate it from other dystopian titles, but also suffers from having too much backstory.

The long and short of it?  While the idea was an interesting one, for me, 'The Hunt' just didn't hold up.  'The Hunt' wasn't my cup of tea and gets 2 out of 5 stars from this little blog.
Posted by Brooke at 9:45 PM