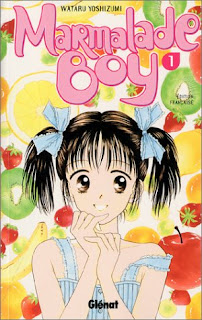 Taken from 'Amazon', "Talk about dysfunctional! Miki is horrified to learn that her parents have swapped with another couple, and that all four now plan to live under one roof. But when her new stepbrother, Yuu, shows up, he appears to be just the one to ease her mental anguish... that is, until she sees the bitterness beneath his cool exterior. The strange romance that follows would make any love triangle seem ordinary by comparison."

Originally published by the now defunct Toykopop, 'Marmalade Boy' is hands down my favorite manga series.  It's classic shoujo and something you don't want to miss out on!

Volume one introduces you to the main protagonist- Miki.  Miki is your typical high schooler.  That is, until her parents let her in on the news that they're divorcing. Not just divorcing, but swapping partners with a couple they met on a cruise.  Add the other couples high school son and a house they all share and you have some major life complications! 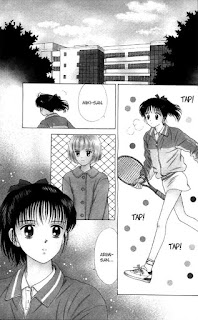 One of the things that makes or breaks manga for me is the drawing style and I love the style used in 'Marmalade Boy'.  Wataru's style is cutesy and comedic, but at the drop of the hat, a character will have an expression on their face that just draws you in.  I love it.

The story found in 'Marmalade Boy' is filled with humor, angst, memorable characters, and true love.  This is a manga you'll want to check out.

'Marmalade Boy' runs 8 volumes.  Currently, most of the run is 'out of print', but you can still find copies used at conventions, online, or in used bookshops.