Review: Lego Star Wars: Save the Galaxy by Scholastic 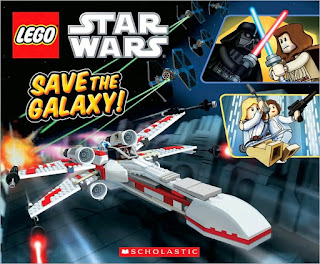 Taken from Goodreads, "Our heroes must evade Stormtroopers, outwit Darth Vader, and steal plans to the Death Star. With a little luck, they might even manage to save the galaxy! Readers can explore the Death Star, a Jawa Sandcrawler, the Tantive IV, the Cantina, and the Millennium Falcon!"


This is a bit of a mini review because, well, this is a review for an oversized board book based on the Lego Star Wars universe, specifically 'Episode IV: A New Hope'. I picked this up on a whim when it arrived on my shelving cart at work and was sold on it instantly.

The illustrations are based off the popular (and entertaining) Lego Star Wars games, which mean they have a cuteness level of adorable! The story is told in comic form with various actions going on in fun comic squares accompanied by thought bubble dialogue. One of the best things about this title?  Lines of dialogue aren't verbatim from the movie. Some are, but many are tweaked in very clever ways. (For example, did you know C3PO speaks dishwasher?) None of the lines make fun of the saga, but they definitely poke fun at it, which is something us Star Wars fans tend to do a lot ourselves!

So, while this isn't the usual fare you find here on the blog, look at this book. It gets 5 out of 5 stars! You'll probably find it in the kids dept, along with some other fun Star Wars books you may have missed!
Posted by Brooke at 9:14 PM